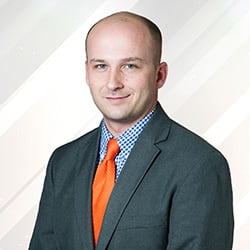 Tucker Sargent joined the 41NBC news team in April 2012. He’s from Alabama, but you won’t catch him saying “Roll Tide!” Tucker grew up near Auburn before moving to north Alabama.

He graduated from Danville High School in 2007 and loves to return to the Tennessee Valley any chance he gets.

He moved back south to Troy, Alabama after high school, where he graduated from Troy University in 2011 with a B.S. in Broadcast Journalism. He interned in Huntsville at WAAY-TV before joining 41NBC.

His passion is sports, and his favorite teams are the Auburn Tigers and Troy Trojans. On the weekends you can catch Tucker watching college football on Saturdays and NASCAR on Sundays!

He’s proud to call middle Georgia home for now and could always use a story idea from you, so don’t hesitate to get in touch with him!

UPDATE: Arrest made in connection to shooting death of 15-year-old

Monroe County deputies: Woman arrested after shooting at her parents

Johnson County deputy, wife charged with contributing to delinquency of a minor

Houston County EMA reports major damage, but everyone is ‘accounted for’