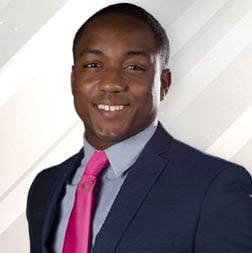 He anchors the news at 6 p.m. and also covers stories going on throughout the day.

He was born in Brooklyn, New York and raised in Stone Mountain, Georgia, a suburb right outside of Atlanta.

Before heading to Middle Georgia, Skyler worked as a stage manager for WSB- TV in Atlanta.

Skyler graduated from Georgia Southern University in Statesboro, Georgia in 2011 with a Bachelor’s of Science degree in Multimedia Communication. He went to school initially to be an architect, but one step inside of the student radio station changed everything.

While at Georgia Southern, he was exposed to radio and television and became the Program Director of the student radio station and was a part of a team that received a Southeast Regional student Emmy for their work on the program “Inside Georgia Southern Football.”

Skyler anchored and reported for Georgia Southern University’s “Eagle News.” There he covered the 2010 midterm elections live as well as reported on stories in the community. In the Spring 2012, Skyler interned for Clear Channel in Los Angeles, California.

In his free time, you can find Skyler watching the latest movies and reading up on all things in Hollywood. He also loves spending time with his family and friends and finding inspirational quotes.

He loves telling stories about politics, tax dollars at work in the community, and highlighting people and business who don’t normally get the spotlight.

If you have any story ideas, email Skyler at shenry@41nbc.com.

New president of FVSU has new ideas for growth

Suspect behind bars in Milledgeville after string of burglaries