MACON, Georgia. (41NBC/WMGT) – An abundance of sunshine will be seen across Middle Georgia this afternoon. 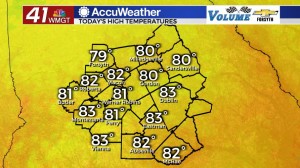 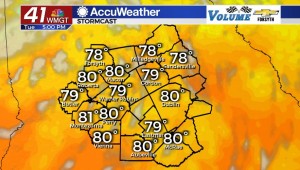 A thin layer of mid-level clouds formed during the early morning hours, obstructing the view of the sunrise around Middle Georgia today. Those will slowly break up through the rest of the morning hours leading up to lunchtime. The middle of the day today will see almost clear skies across the region, quickly warming things up after a slow start. Temperatures this afternoon will climb into the lower 80s around the region, very similar to yesterday. During the later afternoon hours a few scattered clouds will fill in, however blanket conditions are unlikely. An isolated chance for a spotty shower or two also remains during the late afternoon and evening hours. The vast majority of Middle GA will stay dry, however. Any clouds that form during the later part of the day will fade out during the early overnight hours. This will allow low temperatures to fall into the lower 60s and upper 50s around the region. 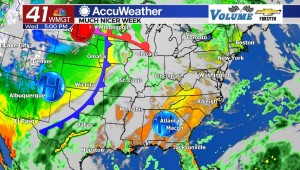 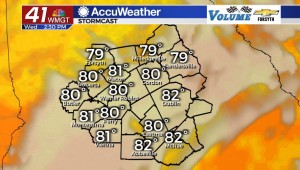 Wednesday looks to be a near repeat of Monday’s conditions with a couple of small differences. The morning will kick off under clear skies with cool temperatures in the lower 60s and upper 50s across Middle GA. As the later morning hours arrive, however, so will a large layer of high level cirrus clouds. These will hang over Middle GA throughout the middle of the day, but much like Monday, a decent amount of sun will get through. Temperatures will be a couple of degrees warmer than today for most of Middle GA tomorrow afternoon, topping off in the mid 80s. The chance for rain is negligible Wednesday afternoon, and the higher level clouds should break heading into the evening. These clouds will be back to some degree during the overnight hours heading into Thursday, however, allowing lower temperatures to climb a few degrees back into the mid 60s. 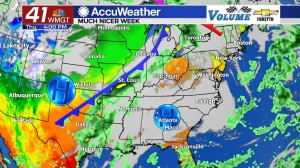 The rest of the work week will see a mix of sun and clouds much like Monday and today. Temperatures will continue to gradually climb each day heading toward the weekend ahead of the next cold front. Rain chances will remain minimal through the rest of the work week with even spotty showers being hard to come by. Over the weekend is when the next one will arrive; Saturday will see the passing of a cold front during the afternoon hours that will likely bring some scattered thunderstorms. At this time it is expected these thunderstorms will be short lived. In the wake of the cold front clear skies and temperatures in the mid 70s will be left behind. 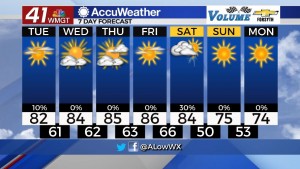