MACON, Georgia. (41NBC/WMGT)- Fall weather will carry into the final weekend of September. 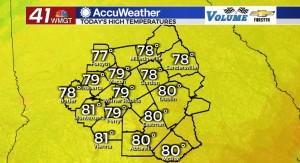 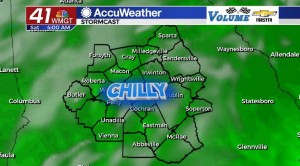 The first day of fall was absolutely gorgeous. There was not a single cloud in the sky, and the absence of high humidity was very refreshing. Today is going to be more of the same with only a couple of minor differences. The first thing to note is a change in wind direction. The past day as well as Wednesday evening saw cool and dry air brought into the Peach State via northwest wind. That wind has shifted to out of the east now, bringing in maritime warm air from the Atlantic. Humidity shouldn’t climb much with this change. The other difference is that temperatures this afternoon will be a couple of degrees warmer than yesterday topping off in the upper 70s and lower 80s. Tonight we will see a few high level clouds move into Georgia from the west. These will be thin and not bring any chance for precipitation. Temperatures will bottom out in the low to mid 50s around Middle GA under mostly clear skies. 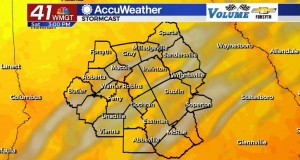 The thin clouds that began to move in overnight Friday will stick around for Saturday afternoon. These are cirrus clouds that the sunlight pass through without issue as they gracefully move across the sky. Temperatures will continue to warm up despite the bit of cloud cover, topping off in the lower 80s for the majority of the region. Wind will return to the northwest, clearing out the little bit of moisture that was brought in Friday afternoon. The northwesterly flow will continue through the overnight hours as the high level cirrus clouds clear out of Georgia. Low temperatures will fall into the mid 50s.

Sunday will see clear skies return with temperatures climbing up into the lower to mid 80s. Wind will continue to blow from the northwest as well, allowing the moisture content of the air to remain well below what it typically is this time of year. This weather would be fantastic for anyone who wanted to catch the Falcons or Braves games, however both of those teams are playing road games with the birds in New York to take on the Giants and the Braves in San Diego taking on the Padres. The skies will remain clear overnight Sunday once again; temperatures out the door on Monday morning will fall into the mid to upper 50s.

More of the same will get the final week of September started. There will be some high clouds that fill in here and there, and temperatures will gradually increase throughout the week. Humidity will remain below average as well for much of the week. For those who want to catch the Braves final homestand of the season, they open play with the Phillies Tuesday night. Temperatures will be in the 70s when the first pitch is thrown after 7 pm. The final series of the season will begin next Friday, however things towards the end of next week are still up in the air for one major reason: Sam. As of now Hurricane Sam is a Category 1 storm on the Saffir-Simpson wind scale. It’s out to sea at the moment, but it’s likely to be in the Caribbean early next week. More will become clear about potential late week impacts at that time. 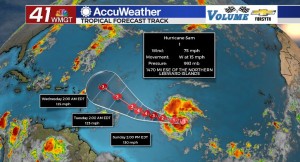 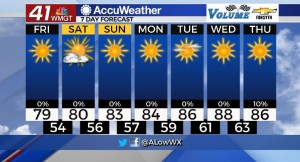