Winter weather possible for some locations in Middle Georgia

MACON, Georgia (41NBC/WMGT) – A strong storm system will bring powerful winds and heavy rain along with a potential for winter weather to Middle GA this weekend. 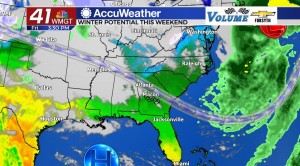 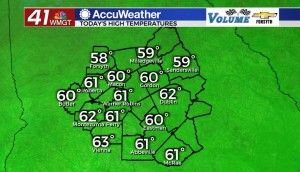 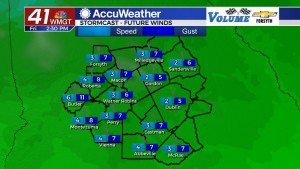 We get one more day of sunshine around Middle GA before cold, windy, and wet weather takes over on Saturday. Highs will reach the upper 50s and lower 60s around Middle GA this afternoon under sunny skies. The wind will blow generally out of the north-northwest at 5-10 mph. A few more clouds will begin to fill in during the evening hours. 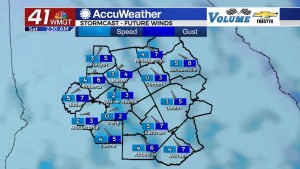 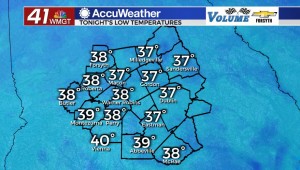 Overnight cloud cover will increase rapidly as the wind begins to shift eastward. Overnight it will mainly blow out of the northeast at around 5 mph as the blanket of clouds thickens over the region. However, despite the cloud cover increase low temperatures will drop into the upper 30s and lower 40s heading into Saturday morning. 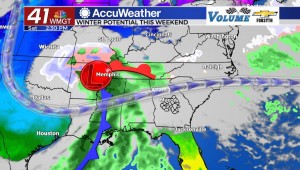 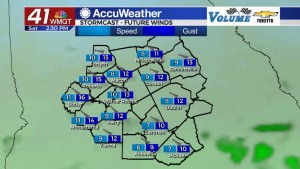 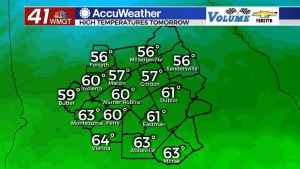 Clouds will blanket Middle GA (and the whole Peach State) all day long. Highs around the region will still be rather warm thanks to winds that shift to the southeast early on. Expect peak temperatures in the upper 50s and lower 60s again around the region, though there is a good chance for a greater disparity between today and tomorrow in cities further north. The wind will increase in speed and gust frequency as the evening draws on, likely reaching sustained speeds of 15 mph around sunset. Light rain will begin to move into the region from the west shortly after dinnertime with heavy rain arriving before midnight. 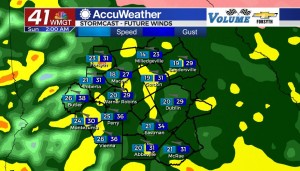 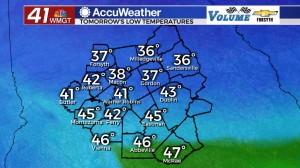 The overnight conditions Saturday into Sunday will be quite hazardous around Middle GA and it’s NOT because of winter weather. Heavy rain will fall all night long as winds blow from the east at 20+ mph sustained with gusts over 40 mph. Visibility will be extremely low as temperatures plummet into the mid to upper 30s rolling into Sunday morning. A couple of northern cities such as Forsyth or especially Sparta could see temps reach close to freezing come Sunday morning. Hancock county has the highest risk for freezing rain Sunday as plenty of it falls around northeast GA. 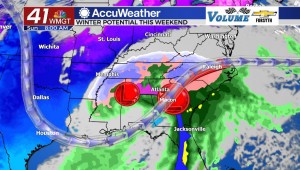 A chilly and cloudy day; some areas in Middle GA will not see temperatures increase much if at all from Sunday morning into the afternoon, especially northern cities. As the cold air wraps around the newly formed low pressure in Eastern GA, temperatures will continue to fall. The question is how quickly do those temperatures drop. If they drop faster, the odds for parts of Middle GA to see winter precipitation increase. There is a decent chance somewhere like Forsyth, Gray, Milledgeville, or Sparta see some snowfall. It is HIGHLY UNLIKELY that any of these locations see snow or ice accumulations (the odds for Sparta to see ice accumulations are much greater than those other locations to see snow accumulations, however). 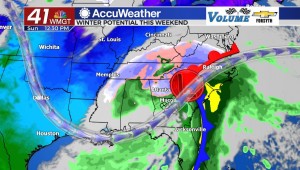 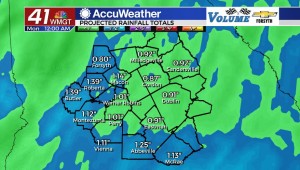 The precipitation will taper off in the afternoon as the temperatures around most of Middle GA fall towards the freezing point. The wind will also shift out of the southwest during the day, still blowing at speeds in excess of 15 mph and gusts over 30 mph.

Overnight precipitation will stop and cloud cover will slowly clear out leading into Monday morning. Low temperatures around the region will hover around the freezing point. 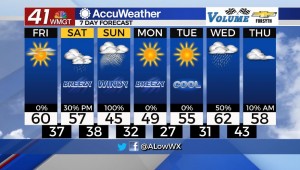