Summertime feels are making a return as sunny weather hangs around 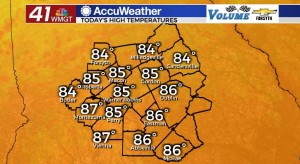 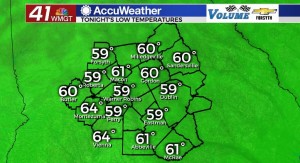 It’s the final Monday of September and the fall like weather we experienced late last week is already moving out. It’s not that rain is moving in, or even that cloud cover is moving in. Once we get a taste of fall in Georgia, temperatures will typically rebound at least once if not twice more back into the upper 80s and lower 90s before cooler conditions stick around. This week is going to be one of those cases, and it begins today. Sunshine will remain abundant in the Georgia skies this afternoon, warming up temperatures in middle Georgia to the mid 80s with a couple of upper 80s. A few scattered clouds are likely this afternoon to accompany it; surface heating that will support convection is beginning to return with the warmer conditions. With that being said, however, rain is not expected in any capacity this afternoon. The sky will remain mostly clear overnight as low temperatures fall into the lower 60s. 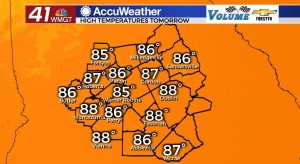 The warming trend rolls on towards the middle of the week. More clouds will fill in over Middle Georgia tomorrow afternoon, however sunshine will still dominate. Temperatures will also continue to climb as the majority of the region reaches the upper 80s tomorrow afternoon. Rain chances remain at about zero for the afternoon hours, though a weak disturbance in the tropics could bring some rain to southern GA. While we may miss the rain here in Middle GA, the humidity is slowly creeping back up for us. Low temperatures for Tuesday night are likely to jump a few degrees around the region as the moisture content in the atmosphere rises. Skies overnight tomorrow will remain mostly clear. 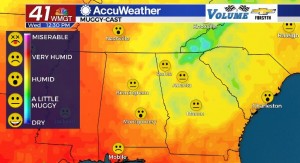 More of the same is likely for the middle and back half of the week. The high pressure is going to hand around over Georgia and South Carolina, allowing our conditions to overall remain pleasant. Summertime feels are returning for the middle of the week as temperatures will stick in the upper 80s and some lower 90s by Wednesday afternoon. Rain chances will remain slim, but the chance for a pop-up shower will return at Wednesday the earliest with the chance increasing towards the weekend. Cloud cover overall this week will remain low with the highest concentration of them occurring during the late afternoon hours later this week. This is also when the chance for a shower will be highest. 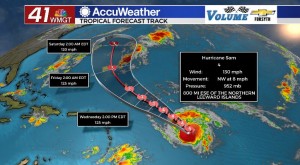 As for Hurricane Sam in the Atlantic, there is no immediate threat at this time. The storm is a monster Category 4 Hurricane on the Saffir-Simpson wind scale packing sustained winds of 130 mph. It’s moving very slowly towards Bermuda at this time, and while not an immediate threat to the US, should still be monitored. If the forecast track of Sam should change and it does make a US landfall, that could change rain outlooks for Georgia in a heartbeat. 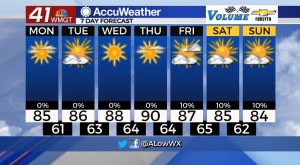