New pattern to bring plenty of rain to Middle GA

MACON, Georgia. (41NBC/WMGT) – The formation of a ‘noreaster will bring showers and a cold front to the Peach State midweek. 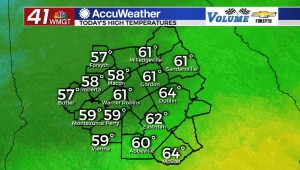 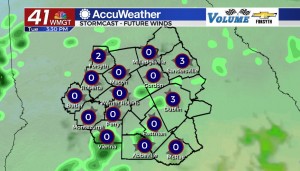 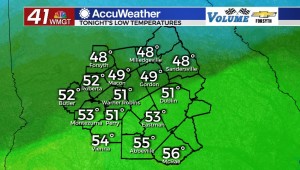 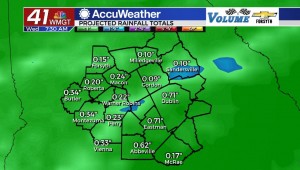 Cloud cover from overnight was clearing out over Middle GA as the sun rose Tuesday morning. Not all of the clouds cleared, however, and there will be an abundance of them throughout not just today, but also this week. Showers are likely around Middle GA today with the chance for them increasing as the day progresses. It will be a mild afternoon as temperatures top off in the upper 50s and lower 60s under mostly cloudy skies. Winds throughout the afternoon will be calm and variable; speeds will likely remain below 5 mph. Overnight tonight rain chances will increase further as the ‘noreaster forms, creating a cold front that will move through Georgia on Wednesday. Expect widespread shower activity after midnight with rain intensity picking up towards sunrise. Low temperatures will be in the upper 40s and lower 50s around the region. 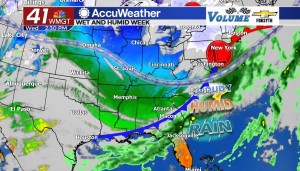 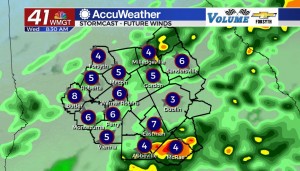 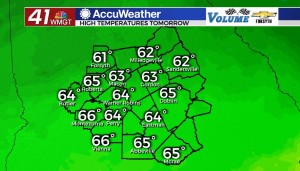 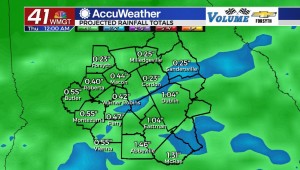 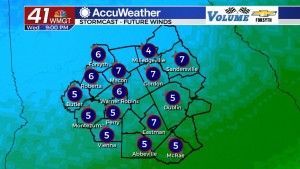 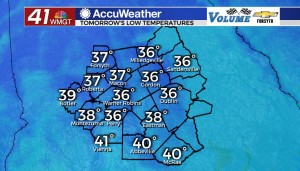 Wednesday will be one of the wettest days around Middle GA this week with the other likely to be Saturday. Moderate to heavy rainfall is likely in several locations around and just after the sunrise on Wednesday. The cold front will move through around lunchtime, bringing a line of moderate to heavy rainfall with it. The wind will shift to the northwest once the cold front passes, allowing cloud cover to break heading into the evening hours of Wednesday. By the time the cold front has passed, many locations in Middle GA will have received between half an inch and an inch of rainfall. The northwest winds will persist into the overnight hours with speeds of 5-10 mph. Gusts could exceed 15 mph. Low temperatures will fall into the mid to upper 30s for most of the region as well due to the lack of cloud cover to insulate the surface. 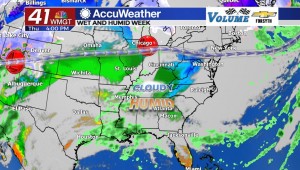 Thursday will see the cloud cover return ahead of the lunchtime hours as another weak system begins to form over the Midwest. The wind will shift to the southeast ahead of lunchtime as well with speeds hovering around 5 mph. Showers, however, will likely hold off until at least the evening hours of Thursday. The cloud cover will keep things mild though as highs reach the low to mid 60s around the region. Overnight clouds will persist overhead as shower activity picks up. Low temperatures will fall into the upper 40s and lower 50s as the insulation of thick clouds returns. 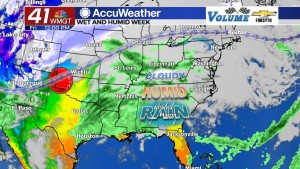 Friday will be an overcast day with plenty of shower activity throughout the day. The low pressure to the north will begin to break down as a more powerful system forms off to the west. Persistent southerly winds on Friday at 5-10 mph will allow temperatures to climb to unseasonable mid 70s around the region. In fact, low temperatures Friday night will be in the lower 60s for several spots in Middle GA, which is equivalent to or warmer than high temperatures from Tuesday. 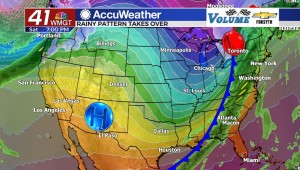 Saturday will see the next cold front move through as a stronger low pressure system moves northeast through the Ohio Valley. The setup is potentially there on Saturday for severe weather with highs in the upper 70s and strong breezes (10-15 mph G 20+) are likely as a warm front moves through. If skies remain overcast, however, it will reduce the severe weather threat. This is expected to be a strong cold front as temperatures will drop from the upper 70s into the lower 40s by Sunday morning. 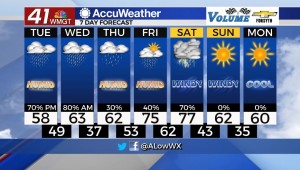