Cooler and drier conditions returning ahead of the weekend

MACON, Georgia. (41NBC/WMGT) – Cooler weather and pleasant conditions are returning to Middle GA thanks to another cold front. 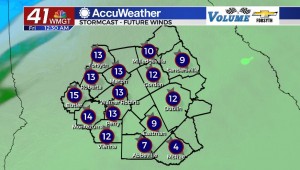 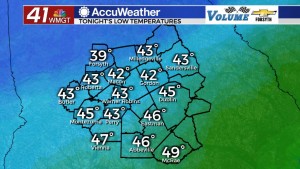 The winds have shifted from the southwest to the north-northwest for most of Middle GA as the overnight hours arrive. Eventually they will take over the entire region, pulling in cooler and drier air heading into Friday morning. The winds will be pretty breezy too; sustained speeds will be from 10-15 mph with gusts over 20 mph. Low temperatures will fall around 10 degrees in most locations when compared to this morning bottoming out in the lower 40s. A couple of locations may see temperatures fall into the upper 30s. 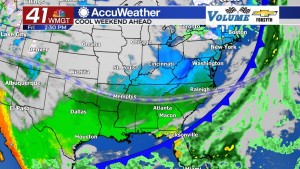 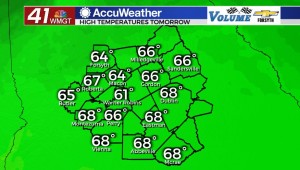 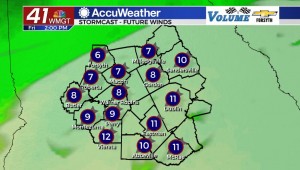 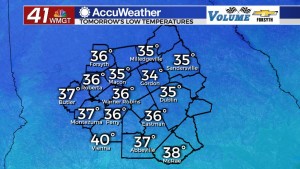 A few clouds will still hang around from the night before to kick off our Friday. Additionally, unlike recent days after a cold fronts passing, the winds will shift to the northeast instead of remaining out of the northwest. That will keep a bit of moisture in the atmosphere and thus our Friday will not be a cloudless day. High temperatures will also be upwards of 15 degrees cooler than Thursday, topping off in the mid to upper 50s. The wind will remain out of the northeast through the overnight hours, however almost all clouds are expected to clear out by sundown. Low temperatures will cool further in response, bottoming out in the mid to upper 30s. 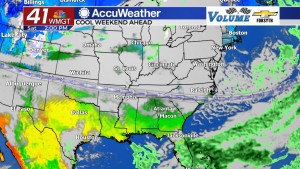 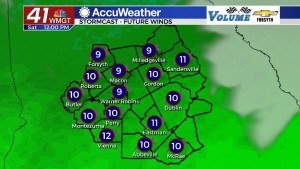 Saturday will be the coolest day of the weekend as high temperatures only reach the low to mid 60s across Middle Georgia. It will also see the fewest clouds in the sky despite the wind shifting to the east-northeast during the morning hours. These winds will be relatively breezy, maintaining 10-15 mph speeds and gusts around 20 mph. Cloud cover will begin to fill in a bit more during the overnight hours, but blanket conditions are not expected. Low temperatures will be a bit warmer in response to the added cloud cover, bottoming out in the upper 30s and lower 40s. 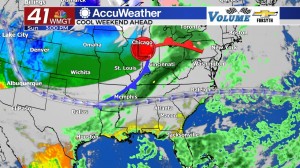 The next storm system will begin to develop over the eastern plains Sunday afternoon, and it will quickly make its way eastward. Cloud cover from Saturday night will continue to fill in on Sunday, leading to a mostly cloudy afternoon. Winds will shift out of the southeast, adding warmth and moisture to the atmosphere, warming the high temperatures around the region back into the upper 60s. A location or two may see highs in the lower 70s, however the odds of that at this time look low given the overhead cloudy conditions. Rain chances will also increase overnight heading into Monday as another cold front looks to push through during the late night hours of Sunday and into Monday morning. Low temperatures heading into Monday morning will be in the upper 40s for most of Middle GA. 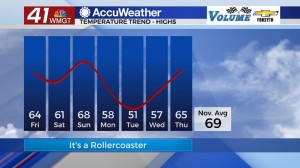 Cooler conditions and sunny skies return Monday afternoon as highs only reach the upper 50s. Breezes will be strong out of the northwest on Monday afternoon as well, likely hovering around if not over 15 mph sustained. These will persist through the overnight hours, allowing low temperatures to fall into the low 30s with several locations falling to or below freezing. Tuesday will be even cooler as the northwest winds stick around, this time only climbing into the lower 50s under sunny skies. Conditions will warm back up ahead of Thanksgiving, however, with 60s expected again by Thursday. 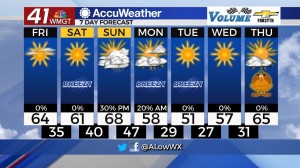