WHO concerned by ‘rapid escalation’ of virus, as U.S. death toll nears 5,000

The head of the World Health Organization has voiced deep concern over the “rapid escalation” and global spread of the new coronavirus pandemic, as the United States nears a grim milestone of 5,000 deaths.

“Over the past five weeks, we have witnessed a near exponential growth in the number of new cases, reaching almost every country, territory and area,” WHO Director-General Tedros Adhanom Ghebreyesuss told a virtual news conference at the organisation’s Geneva headquarters on Wednesday.

“The number of deaths has more than doubled in the past week. In the next few days we will reach 1 million confirmed cases, and 50,000 deaths,” he added. 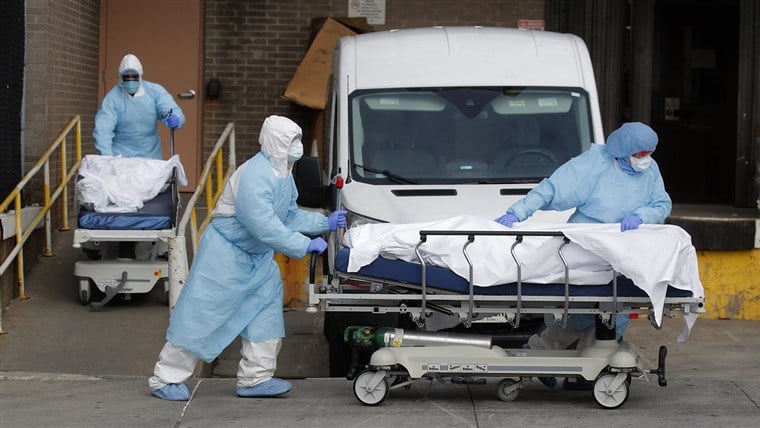 The stark warning comes as the United States barrels towards marking 5,000 coronavirus-related deaths, with more than 4,800 already recorded across the country as of early Thursday morning. On Wednesday, the death toll in New York state jumped 25 percent in just 24 hours to nearly 2,000 dead, according to NBC News’ tally.

Having first emerged in China in December, four months later it is the United States that has registered by far the highest number of coronavirus cases, more than 210,000 as of Thursday, according to a tally by Johns Hopkins University.

The total number of people infected worldwide has now surpassed 940,000 and the number of coronavirus related deaths recorded has breached 47,500, according to Johns Hopkins.

However, the numbers are believed to be much higher due to limited numbers of tests in many countries, differences in counting the dead and a large number of mild cases believed to have gone unreported.

While the United States has recorded the highest number of cases, Italy has outstripped other nations when it comes to coronavirus-related deaths, with more than 13,000 according to Italian authorities.

On Wednesday evening, Italian Prime Minister Giuseppe Conte signed a decree extending Italy’s lockdown measures until April 13. The current lockdown was due to elapse on April 3.

Conte said he was sorry that the lockdown would include Easter celebrations but that the country could not “lower our guard, now that we are seeing the first results of the restrictive measures.”

His comments came after the president of Italy’s National Institute of Health told reporters that his country’s coronavirus curve had reached the stage before the contagion begins to decline.

On Thursday Spain confirmed it had passed the 10,000 death mark. But despite its high death toll, experts there say they have witnessed some positive developments in recent days.

Fernando Simón, head of the country’s emergency coordination center, said Wednesday that he believes Spain has reached its own peak.

“All data indicate we’re going in the right direction. But we must maintain the measures implemented to further reduce risk of infection,” he told reporters via Skype.

The number of coronavirus patients in intensive care units in Madrid also decreased for the first time on Wednesday.

However, only time will tell whether these positive assessments last.

Meanwhile, Israeli Prime Minister Benjamin Netanyahu’s office announced Thursday that he would be in isolation until next Wednesday after Israel’s health minister tested positive for the coronavirus.

The decision was made following the recommendation of his personal physician and the instructions of the ministry of health, his office added.

The Associated Press contributed to this report.

Saphora Smith is a London-based reporter for NBC News Digital.