Weekend rain chances are lower but still there

MACON, Georgia. (41NBC/WMGT)-Leftover moisture from Nicholas has brought plenty of rain to Georgia, but it’s beginning to fizzle out. 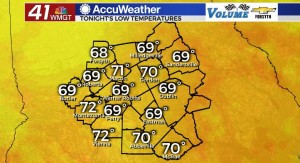 We’ve seen some rain around Middle Georgia today, but it was very scattered. We’ve continued to see that pattern through the evening hours as high school football games got under way. These isolated showers will persist into the overnight hours, but the majority will fizzle out by midnight. The cloud cover will stick around into the morning, keeping low temperatures on the warm side. Expect lower 70s and upper 60s heading out the door tomorrow morning. 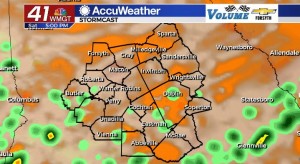 For Saturday, the morning will kick off under a blanket of clouds. During the afternoon, however, these will break to some degree, allowing pockets of sunshine to form and warm things up. High temperatures tomorrow will be in the mid to upper 80s around Middle GA. Scattered showers and a few thunderstorms will fire up during the late afternoon hours. Not everywhere will see these, but it would be a good idea to keep the umbrella on hand just in case. The showers and storms will fizzle out during the overnight hours as a blanket of clouds fills in once again heading into Sunday morning. A few locations could wake up to patchy fog.

Sunday will see similar conditions to Saturday, but a few key differences are going to keep temperatures a bit cooler. Cloud cover will be abundant throughout the afternoon. Pockets of sunshine will remain possible, but it won’t be as widespread as Saturday. On the other hand, rain chances are going to be higher on Sunday with scattered thunderstorms likely to organize in the afternoon. Heavy localized rainfall could be possible in a few areas, however most of the region will only deal with light rain. Some may not see any rain at all. High temperatures will return to the lower to mid 80s with lows remaining in the upper 60s and lower 70s. Cloud cover will persist into Monday. 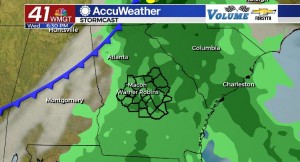 The trend of mostly cloudy skies with scattered afternoon storms will persist beyond the weekend and into next week. A cold front will begin to march across the US early next week, not reaching the southeastern US until at least Wednesday. Temperatures until then will hang around the lower to mid 80s for the region, and abundant sunshine should not be expected. The cold front will bring the potential for severe weather late week as widespread thunderstorms will be likely ahead of it. Once the cold front passes, high pressure behind it will bring sunny skies. Temperatures will also fall and begin to feel more seasonal with the first day of fall being Wednesday. Highs after Wednesday will be in the 70s around the region with lows dropping into the mid 50s. 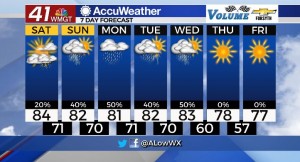