Chastain confirmed his departure by phone Wednesday night. The hire is pending school board approval.

“Coach Rogers has definitely got that place where football is important,” Chastain said. “I’m excited to go in there and build on what’s already been built the past few years there. Just can’t wait to get up there and be with those guys and minister and love on those guys in Jones County like we’ve done here at Warner Robins High School.” 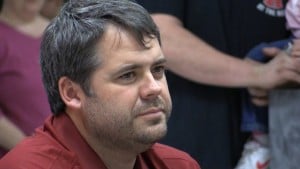 Mike Chastain is seen at a meet-and-greet at Warner Robins High School after his hiring in 2016.

“He’s got a meeting with the board Friday is what Coach Veal said,” Costlow said. “So it’ll be official Friday night more than likely.”

Chastain, a Northside High School graduate, was hired at Warner Robins in 2016 after Bryan Way’s departure.

His first team went 3-8 but his last two have gone 26-4, including back-to-back appearances in the GHSA AAAAA Championship Game. The Demons fell to Rome 38-0 at McConnell-Talbert Stadium in 2017 and overcame a 28-point third quarter deficit before falling to Bainbridge, 47-41, in three overtimes at Mercedes-Benz Stadium in 2018.

Chastain, who was Houston County’s offensive coordinator and quarterbacks coach from 2013-2015 and has also coached at other middle Georgia schools, including Northside, Peach County and Bleckley County, said it’s been an honor to be the head coach at Warner Robins.

If hired, he would replace Justin Rogers, who left Jones County this week for Colquitt County after leading the Greyhounds to a 45-15 record in five seasons.

Chastain says he was led to accept the Jones County job and had this message for anyone who thought otherwise.

“Those people probably don’t have the faith that I do,” he said. “When me and my wife sat down and prayed about this job, we felt like God was leading us there.”

Correction: The original story stated Warner Robins blew a 28-point lead in the 2018 GHSA AAAAA championship game. The Demons overcame the deficit only to lose in triple overtime. The statement has been corrected.