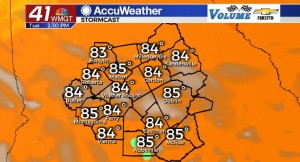 The fall weather was nice while it lasted, but temperatures are quickly warming back up to what they were before the cold front passed. The sunny skies will continue this week, but now with warmer temperatures coming back afternoon showers will be possible as well. For today, we will have some high level clouds moving through the state, but plenty of sunshine will get through. This afternoon we will see some lower level clouds develop as temperatures warm into the mid to upper 80s around Middle GA. And while the majority of us will stay dry, an isolated shower or two around the region cannot be ruled out. The showers that develop will not last long; nothing will last beyond the sunset as overhead clouds clear out. Temperatures will fall into the low to mid 60s by Wednesday morning. 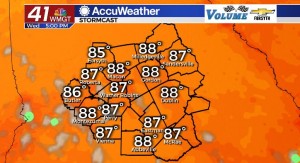 Temperatures will continue to rise for the middle of the week with some locations knocking on the door of 90 degrees. Less cloud cover is also expected for Wednesday, allowing further warming. Despite the fewer clouds a couple of isolated showers will still be possible in the afternoon, though the majority of Middle GA will remain dry. Humidity will drop for Wednesday as the surface winds shift out of the northwest. The air from the north will drop the humidity ever so slightly, however there isn’t enough wind speed to drop temperatures. High temperatures will top off in the upper 80s and lower 90s. Low temperatures overnight will be in the mid 60s under partly cloudy skies. 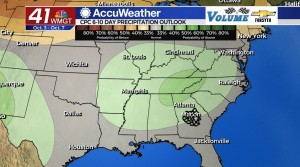 More cloud cover will continue to fill in as September ends and October begins. These will primarily be high level clouds, though low level clouds will fill in during the afternoon. Temperatures are expected to peak on Thursday as much of Middle Georgia eclipses the 90 degree mark. Isolated PM showers will remain possible through the end of the week with chances further climbing over the weekend. Humidity will gradually increase heading into October as well; wind from the southwest will bring warm moist air into the Peach State from the Gulf of Mexico. Overall rain chances will remain low into the weekend as temperatures gradually begin to cool. However, above average rainfall is expected around the Southeastern US next week. 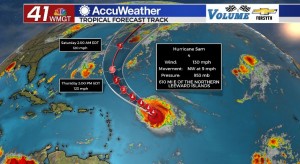 In Hurricane Sam news, the storm will remain out to sea and avoid a US landfall. 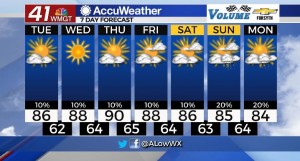