Sub-freezing temperatures have arrived for the first time this fall

MACON, Georgia. (41NBC/WMGT) – The effects of yesterday’s cold front are finally being felt around Middle Georgia as temperatures near freezing kick off Tuesday. 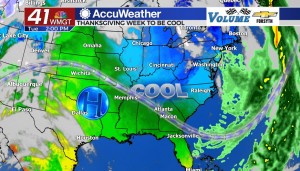 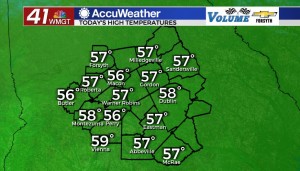 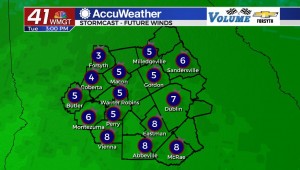 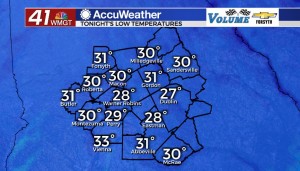 The sun is back in all of its glory today as clear conditions hang around after following another cold front. Today will likely be the coolest day seen this week around Middle GA as temperatures only climb into the mid to upper 50s. Wind from the north-northeast around 5 mph will continue to feed cooler air into the Georgia atmosphere. This will shift to the east-southeast overnight, allowing some moisture to begin to build back up. Temperatures overnight will drop to the lowest point so far this season with the majority of the region expected to fall below freezing. The skies will remain clear all night long heading into Wednesday. 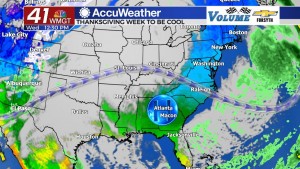 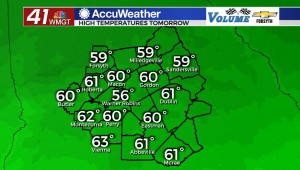 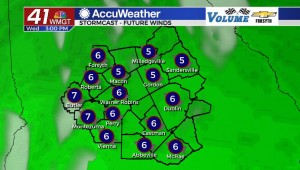 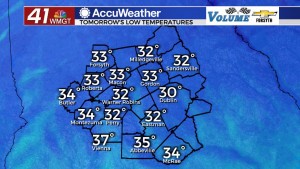 Wednesday will begin with some bitter cold around Middle GA. These will be replaced with warmer conditions during the afternoon as high temperatures begin to eclipse the 60 degree mark in parts of the region. The added moisture thanks to southeast winds will also allow some cloud cover to develop in the afternoon. There will not be enough moisture for rain on Wednesday, however, and the cloud cover will remain isolated as long as the sun is up. Once the sun sets, however, more high level clouds will begin to fill in heading into Thanksgiving morning. Low temperatures overnight Wednesday will fall into the mid to upper 30s, warming back up from the sub-freezing conditions Tuesday night. 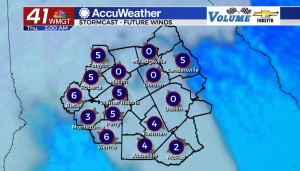 With the exception of Monday Thanksgiving will be the warmest day this week. Temperatures around the region will return to the mid to upper 60s as winds shift back to the southwest ahead of yet another cold front. The winds will likely hover just below 10 mph and cloud cover will build throughout the day. Rain, however, should not interfere with any Thanksgiving plans in Georgia. The cold front isn’t set to arrive until after midnight heading into Friday morning. Most of the rain will also fall in Northern GA, however the northern counties of Middle GA have a good chance for showers. Those further south are not guaranteed to see precipitation with only a couple of stray showers likely. Overnight lows will be the warmest seen this week, only falling into the mid to upper 40s – almost 20 degrees warmer than Wednesday morning. 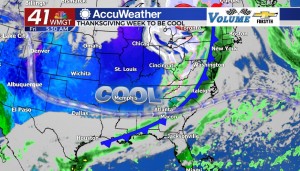 The wind will shift back to the northwest shortly after sunrise on Friday, and temperatures will respond accordingly as highs only reach the upper 50s and lower 60s. The winds are also likely to be breezy (10-15 mph G 20+) throughout the daylight hours before calming overnight. Highs will remain in the 60s over the weekend under mostly sunny skies, hanging there until the next system arrives sometime next week. 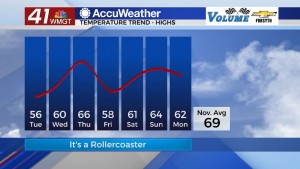 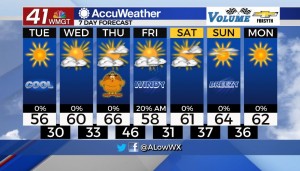