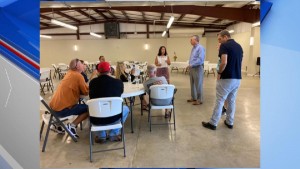 The protestors were a part of the Bibb County GOP, and the signs, including the phrases ‘Ditch Dominion’ and ‘We the People Demand A Statewide Audit,’ are in reference to concerns they have about the 2020 Presidential Election.

The protestors’ goal was for Georgia Secretary of State Brad Raffensperger, who was in the area for a meet and greet, to see the signs. Bibb County GOP Chair David Sumrall had a letter to hand to Raffensperger voicing concerns he has about the November Election.

“We want to register our concerns with the way the last election was done and ask that it be done differently,” Sumrall said.

Sumrall says he’s concerned about voting numbers in Bibb County. He wants to know if Raffensperger will support an investigation into Dominion Voting and asked for better protections for poll workers. Sumrall says even though he didn’t get answers at the meeting, he feels the protest was successful.

Raffensperger says his office has investigated every claim of voter fraud and the office is confident in the results of the election.

The Secretary of State says the amount of disinformation going around causes people to not be confident in election results.

“We want everyone to know that our office will fight for honest and fair elections with the appropriate balance of accessibility and security,” Raffensperger said.

Sumrall says Raffensperger’s office has already reached out to him. He’s hoping to get a response to his letter by the end of the month.