One arrested, another suspect wanted in deadly Washington County shooting

SANDERSVILLE, Georgia (41NBC/WMGT) – The Washington County Sheriff’s Office makes an arrest in connection to a deadly Memorial Day shooting at a block party, but the search is still on for a second suspect.

Deputies arrested 22-year-old Ryan Rozier of East Dublin. He is charged with Possession of firearm by a first offender probationer and Felony Probation Violation.

Investigators are still searching for 24-year-old Brian “BJ” Rozier, of East Dublin. Brian Rozier is wanted on Malice Murder charges. According to the Washington County Sheriff’s Office, he is considered armed and dangerous.

The deadly shooting happened on May 29th at an ’80’s vs 90’s Freak Nik” block party at the Larry Mitchell Ball Park in Washington County. Deputies responded to the scene around 9:30pm Sunday. And they found 17-year-old William Lowery of Louisville and 30-year-old Christopher Dunn of Wrightsville shot. Both victims were sent to the emergency room and later died from their injuries.

Washington County Sheriff’s Office and Georgia Bureau of Investigation Region 12 Office are following leads and tips. Anyone with information on the whereabouts of Brian Rozier is asked to contact our office at 478-552-0911 or GBI at 478-374-6988. 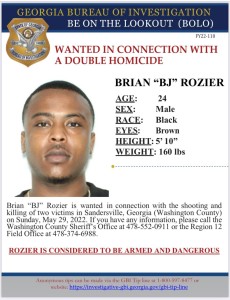 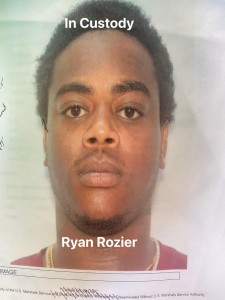