Moon will be performing at Carolyn Crayton Park on the Coca-Cola Entertainment Stage on Saturday, March 26th, 2022 as part of the Nightly Concert Series at the Cherry Blossom Festival. This series will feature local, regional, and national artists each night of the 10 day festival, March 18th – March 27th, 2022. Admission to the Festival is $5 Thursday and Sunday, and $10 Friday and Saturday, Children 10 and under are free.

Moon is known for his Platinum-selling debut single, “Good Time”, which earned him the number 1 spot on Billboard’s Emerging Artists chart and gave solidified Moon’s reputation as “one of the most genuine and creative artists in country music right now”.  Moon was born in Texas and moved to Douglasville, Georgia at a young age. His inspiration ranges from the hip hop of Atlanta to the country music of Newnan, where his music features catchy hooks, sharp wordplay, and electronic beats.

For more updates on the Cherry Blossom Festival and their ever increasing lineup, stay with 41NBC, or visit cherryblossom.com for more information about the upcoming festival. 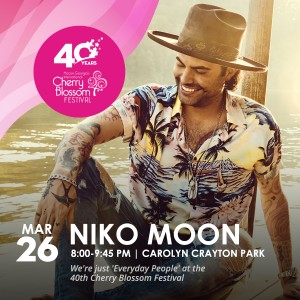