It happened on I-75 Wednesday morning.

FORSYTH, Georgia (41NBC/WMGT) – A Monroe County deputy was hospitalized Wednesday morning after a man he was trying to place under arrest drove away from a traffic stop and crashed with the deputy inside the vehicle.

That’s according to a news release from the Monroe County Sheriff’s Office.

Deputy Dalton Mosley pulled over a 4-door Audi with no tag displayed. The driver, identified as Darion Ponder of Albany, was wanted out of Mitchell County and Webster County on charges including fleeing and eluding and obstruction of law enforcement officers. 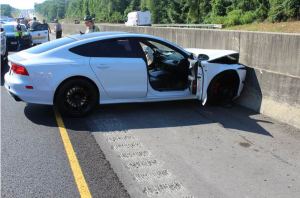 Mosley asked Ponder to get out of the vehicle and told him he was going to be placed in handcuffs.

Ponder argued with the deputy before running toward the driver’s side of the vehicle. Deputy Mosley ran after Ponder and jumped inside the vehicle with Ponder in an attempt to stop him from fleeing, but Ponder put the vehicle in drive and sped away.

The vehicle crossed over four lanes of traffic, according to the release, before crashing into a concrete barrier.

Both Deputy Mosley and Ponder were injured and taken to the hospital. Mosley’s injuries included a head laceration. Ponder broke his ankle.

Deputy Mosley has since been released from the hospital.

Deputies say marijuana was found inside the vehicle and on Ponder’s person.

Ponder is in custody and is charged with aggravated assault on a peace officer, obstruction, possession with intent to distribute marijuana, possession of drug-related objects and multiple traffic citations.