Authorities identified the men as 17-year-old Lamarius Holmes and 21-year-old Allen McDonald, both of Warner Robins. 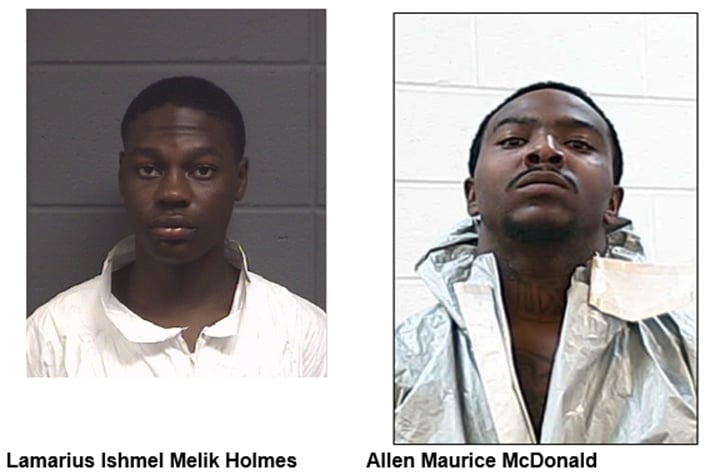 Authorities say the Warner Robins Police Department (WRPD) dispatched officers to the Flash Food on the 1900 block of Watson Blvd. about an armed robbery on April 28 around 11:45 p.m.

Officers say that the men entered the store and went behind the counter.  The incident is still under investigation by both Criminal Investigations and Forensics.

Later, WRPD dispatched officers to the Huddle House at the 200 block of Russell Parkway about an armed robbery on April 29 around 12:22 a.m.

Officers say that the men took some cash and then fled the restaurant.  Victims at the Huddle House then called 911.

Authorities say that officers en route to the restaurant saw a car near the Huddle House driving with its headlights off.  Officers say that when they tried to stop the car, it turned on to Suwanee Avenue at a high rate of speed and crashed.

Officers say that the men ran from the car, but were later captured in the area.  No one was injured.

Authorities say that officers found money and a gun at the crash site.

Authorities charged Holmes with the following:

Authorities charged McDonald with the following:

Anyone with additional information

If you have any information regarding this incident, call the Warner Robins Police Department at (478) 302-5380. You can also call the Macon Regional Crimestoppers at 1-877-68CRIME.