MACON, Georgia (41NBC/WMGT) — A man has been arrested in connection to the death of 38-year-old Jimmy Lee Scott III, who was shot and killed in front of a barber shop on PioNono Avenue in late July.

The Bibb County Sheriff’s Office says investigators identified 21-year-old Adolphus Dewayne Hughes Jr. as the suspect behind the shooting in front of Next Level Kuts on July 29th. Investigators and U.S. Marshal task force members found Hughes at a residence on Highland Avenue, where they arrested him.

Jarel Scott, the brother of victim, Jimmy Lee Scott III, was also injured during the incident, but is listed to be in stable condition now.

Anyone with information about this incident is urged to call the Bibb County Sheriff’s Office at 478-751-7500 or Macon Regional Crime Stoppers at 1-877-68CRIME. 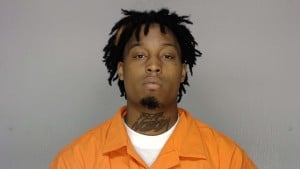