The event was held hours before President Donald Trump’s Rally was set to kick-off in Macon. They spoke out about the continued attacks on the Affordable Care Act, the COVID-19 crisis, and other issues.

“Since our president has decided to make an appearance down in Macon we want to show him exactly what Georgia voters are thinking right now,” said Tamara Stevens, a Joe Biden supporter.

As dozens of cars honked their horns through downtown Macon, they’re encouraged residents to get out and vote for a change. 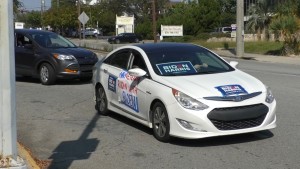 “Trump loves his rallies, and he loves all the attention. We want to have a counter-message, that Georgia is a swing state, and we intend to turn it blue,” said Marla Cureton, a Joe Biden supporter.

“The president violates Governor Kemp’s order and brings a charade to the airport, where a Georgia Tech professor says there’s a 98% chance of transmission of COVID,” Clark said.

“When you have a large gathering there are many more opportunities for transmission,” Weitz said.

Harold Echols and Nick Gardner, who plan to attend the Trump rally disagree with that information.

“I think that COVID is probably spreading as much because we don’t have herd immunity,” Echols said. “We’ve had some bad advice from our medical professionals in this country and we are just going to have to conquer COVID on our own.”

Both say they are willing to take safety precautions but are not worried about the virus.

“Let’s cut to the facts, this is the China virus. It came from China. It was sent here from China,” Gardner said. “We got something that we didn’t know about and deal with.”

As residents share their views, they want more people to vote.

“Talk to your family. Talk to your friends. Parents, get your college-aged kids, your adult kids,” Stevens said. “Get them out there and make sure they vote.”

Community members also made stops at ballot drop box locations across the city to encourage voters to vote early.

Residents who participated and the parade and attended the news conference were advised to wear and mask and social distance.