The position was recently made vacant following the death of Kenton Jones.

Unofficial results from the Twiggs County Board of Elections shows Debbie Hill won the race with 78 votes.

She beat out Sara Jones who had 45 votes and Jim Kellom who had 10 votes.

A total of 133 votes were cast in the election. 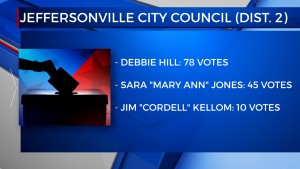