WARNER ROBINS, Georgia (41NBC/WMGT) — The Houston County Deputy who was suspended (pending termination), after making a comment on social media concerning the sentencing in the trial for the murder of Ahmaud Arbery, has resigned.

Former Deputy Paul Urhahn sent a letter of resignation to Sheriff Talton dated on January 16th that he would be formally resigning as a deputy with the Houston County Sheriff’s Office, effective January 19th, 2022.

In the letter, Urhahn says he appreciated the opportunity to serve as a Deputy Sheriff for Houston County for the past 20 years, and has held the position with honor, integrity, and dedication. He says that during his off-duty time while exercising his constitutional right to free speech, a “very unfortunate series of events occurred”, and that “the manner in which they were handled” is something he cannot support. He finishes the letter by saying he cannot continue as a member of the Houston County Sheriff’s Office as it would be against who he is and what he believes in. 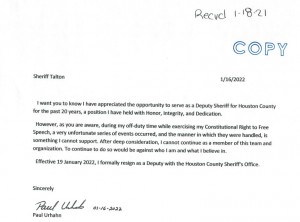 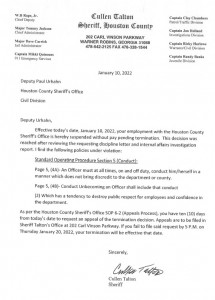 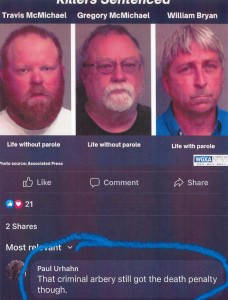