Even on a day that is somber and heartbreaking, the love of Freeman’s friends and family shined through. Friends described him as determined, hard working and a family man. While he may no longer be with them, friends said his unique personality will always be remembered.

“I have to admit, when I first saw him, I wasn’t sure about TJ. TJ was one of a kind,” said Sgt. Brad Surfus with the Bibb County Sheriff’s Office. 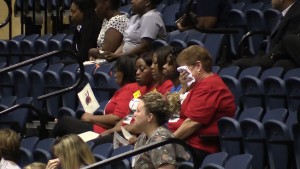 Through laughs, and a few tears, Surfus gave the audience just a glimpse of the person TJ was.

“Those who truly knew him know he was always searching for the next mountain to climb,” recalled Surfus.

Bibb County Sheriff David Davis remembered the last time he saw Freeman. It was at a Macon Mayhem hockey game as the sheriff’s office prepared to face the fire department in tug of war. Sheriff Davis said Freeman thought the team needed another player.

“He ran out to his vehicle, brought Bojar in and participated in the tug of war,” said Davis.

Even though the sheriff’s office lost the tug of war game, it’s a memory Davis said he will never forget.

Law enforcement agencies from across the state came to show their support. Some even brought their K-9 units.

“You didn’t have an opportunity to meet TJ. However, you guys have come because a brother has fallen,” said Surfus. 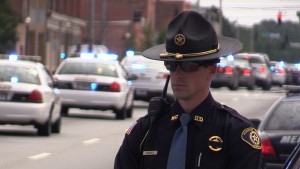 An officer stands next to his patrol car as TJ Freeman’s funeral procession heads to the cemetery.

As the funeral procession made its way to the cemetery, people stood along the side of the road to honor Freeman and thank him for his service.

Freeman was laid to rest at Glen Haven Memorial Gardens. Instead of flowers, the family is asking for donations to be made to Macon Shriners.

Freeman was killed last week while responding to a call. According to the sheriff’s office, the suspect, 24-year old Martavious Kinder, was trying to get away and drove into the driver’s side door of Investigator Freeman’s vehicle. Kinder is charged with vehicular homicide, felony murder and reckless driving.

Investigator Anthony Joseph “TJ” Freeman served with the Bibb County Sheriff’s Office for seven years, after joining the Macon Police Department in 2009. He had been a narcotics investigator for the last five years. He was also a SWAT officer, a K9 handler and was about to start training to become a training instructor.

He is survived by his wife, Jessica, and their two children, Braden, 11, and Blaiklyn, 6.