Fantastic weather across Georgia for this weekend, opening Sunday for NFL.

MACON, Georgia. (41NBC/WMGT)- Sunshine and low humidity are going to stick around through the weekend. 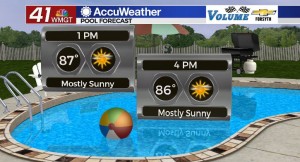 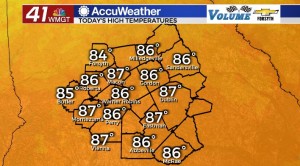 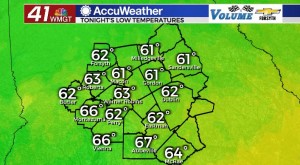 A cool morning got things rolling for the Peach State today. Temperatures fell 10+ degrees for some locations around Middle Georgia when compared to yesterday as the clouds cleared out. The drop in humidity has also made a difference in the diurnal temperature range. There will be some high level clouds over much of Georgia later today, however the sunlight will have no trouble getting through them. Temperatures will top off in the mid to upper 80s. Combined with the lower humidity, this is weather that screams “GET OUTSIDE”, especially with the official end of summer in less than two weeks. However, sunblock should still be worn as the UV indices for today and this weekend are 8 or higher. For tonight, clear skies will stick around as temperatures fall into the lower 60s. Winds will remain under 5 mph from the southeast.

Saturday is almost going to be a repeat of today with a couple of key differences. There will be less of the high level cirrus clouds overhead, and a few more of the mid-level stratocumulus. Temperatures will also be a degree or two warmer across Middle Georgia, with a couple of locations potentially reaching the 90 degree mark. Humidity will still remain low, however, and there will be plenty of sunshine. Winds will blow from the ESE between 5 and 8 mph with a few breezes here and there. Saturday is the home opener for the Georgia Bulldogs as they take on UAB. Skies will remain clear with temperatures in the lower 80s for kickoff. Temperatures will eventually fall into the lower 60s and upper 50s overnight and into Sunday morning.

Sunday and Next Week 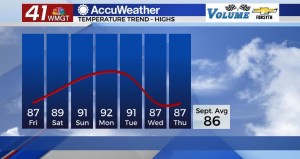 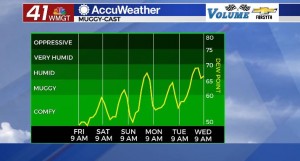 Sunday will once again see an abundance of sunshine as the trend continues. A few more clouds are expected to fill in during the afternoon, and the chance for an isolated shower or two during the afternoon will also increase. High temperatures will top off in the lower 90s and upper 80s for Middle Georgia. Sunday is also the first game of the season for the Atlanta Falcons as they play host to the Philadelphia Eagles. Kickoff is at 1 PM and temperatures will likely be in the upper 80s in Atlanta by that time. Mercedes-Benz Stadium will also likely have the roof open given the low rain chances. Low temperatures Sunday night will be in the lower to mid 60s for Middle Georgia. A few more clouds and some added moisture are going to begin to creep in during the overnight hours heading into Monday.

Monday will finish off the pleasant trend to start the new week. Sunshine will be plentiful, but more scattered clouds are expected in the afternoon as highs top off in the lower 90s once again. A few isolated showers will be possible, and more cloud cover will fill in from the west as the middle of the week approaches. At this time, Wednesday of next week looks to once again be the rainy day of the week with widespread scattered storms expected. 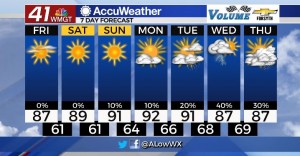