According to the release, a Hillcrest Elementary student saw a classmate bring a firearm to the bus stop Thursday morning. The elementary student reported what they saw, and the firearm was recovered without a hitch. The Dublin Police Department is investigating the situation.

Superintendent Dr. Fred Williams had this to say:

“We always say, ‘See something, say something,’ and in this case we are grateful that one of our students spoke up,”

Williams also expressed that he was thankful that nobody got hurt, and urged parents to be mindful of their children when they leave home. 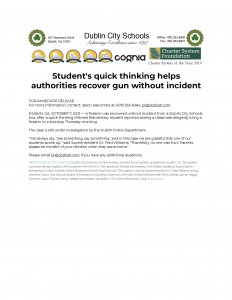