MACON, Georgia (41NBC/WMGT) – It’s going to be a very wet day for much of the southeastern United States as a cold front moves from west to east. 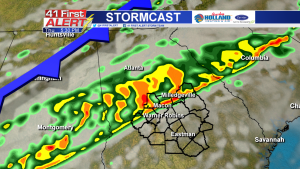 The National Weather Service in Peachtree City has included all of Middle Georgia in a Wind Advisory until 6 p.m. Constant wind speeds will be around 20 mph, though gusts may get as high as 35 mph.

Bring in or tie down outdoor furniture or unsecured items in your yard. Try to avoid driving late this afternoon as the winds will push against vehicles, and visibility will be reduced when driving through downpours. 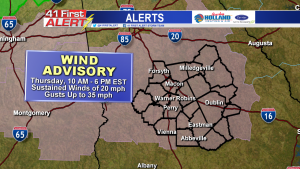 Middle Georgia could get about 0.25 inch of rain in the next 24 hours. The highest rainfall totals are expected in Arkansas, northwest Mississippi and east Tennessee. Those areas are under Flash Flood Watches. 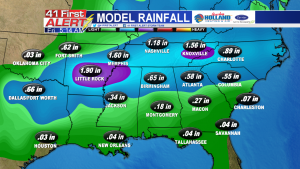 The cold front will clear out of Georgia Friday morning. A large ridge of high pressure will set up over Illinois heading into the weekend. Winds will shift and come from the north as cool, dry air flows south. Skies will remain mostly clear through the weekend. 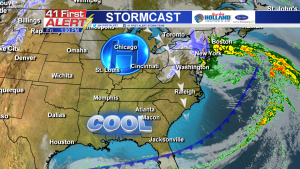 There will be a BIG drop in temperatures heading into Friday. The high temperature on Thursday is expected to be close to 80 degrees. As the cold front comes though, colder air will filter into the region. Highs through much of the weekend will stay in the mid-60’s. 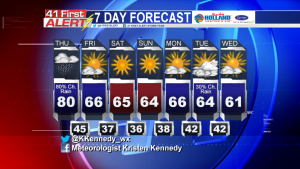