MACON, Georgia. (41NBC/WMGT)- Cloud cover over Middle Georgia is expected to decrease heading into the weekend. 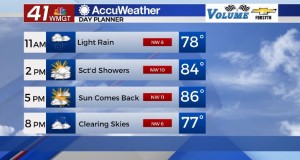 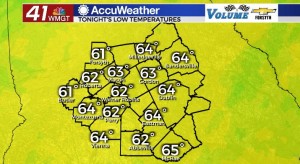 Middle Georgia kicked off Thursday with a blanket of clouds overhead and some lingering rain. The rain was primarily in the southeastern counties of the region, beginning during the early morning hours. As the sunrise passed, so did the rain. Heading towards lunchtime however the clouds for the most part haven’t budged. A few more showers will be possible before the lunchtime hours arrive, and then some clearing will begin. The low pressure system that brought all the rain is continuing to push eastward into South Carolina, paving the way for more pleasant conditions this afternoon. With the return of sunshine this afternoon, high temperatures will return to the upper 80s around Middle GA. A few pop-up showers are expected this afternoon as well, however they will clear ahead of the overnight hours. Low temperatures tonight will drop back into the lower 60s, approximately 10 degrees cooler than last night. Clear skies will accompany them. 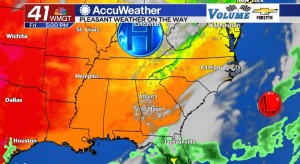 Friday will be a pleasant day for the majority of the Peach State. The lone exception is the southern third, where rain will continue thanks to the landfall of Tropical Storm Mindy. For Middle Georgia, sunshine will be abundant during the afternoon hours as temperatures top off in the mid to upper 80s. There will be plenty of high level clouds, but the sun should have no problem penetrating those to keep conditions optimal. Humidity will also be down as high pressure dominates the majority of the Southeastern US, so the chance for a pop-up afternoon storm is extremely low. Skies will clear out further during the overnight hours as low temperatures fall to the lower 60s once again. These next few nights are a great opportunity for anyone who would like to shut off the AC unit and open their windows for some natural cooling. 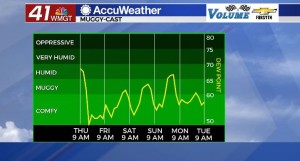 If Friday isn’t pleasant enough, the coming weekend is going to be filled with sunshine. Cloud cover will be minimal for both Saturday and Sunday while temperatures continue a very gradual climb. Saturday will see highs top off in the upper 80s and lower 90s while Sunday will see lower 90s pretty much across the region. A few clouds will form during the afternoon of both days, but with the humidity remaining lower than average rain chances will also remain at a minimum. Outdoor plans will be good to go, but don’t forget the sunblock! UV indices are forecast to be over 8 this weekend meaning it will take less than 30 minutes for someone unprotected to burn. 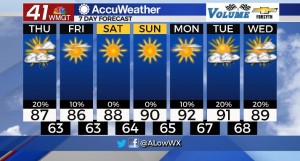