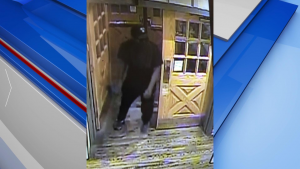 Witnesses told deputies a man entered the restaurant with what was believed to be a handgun wrapped in a towel. He approached the cashier and demanded money before receiving money and fleeing.

The suspect was wearing all black clothing, including a black hat, black glasses and a bandana over his face.

His photo is attached.