Arrest made in connection to Cherry St. homicides

MACON, Georgia (41NBC/WMGT) — The Bibb County Sheriff’s Office has made an arrest in connection to a homicide investigation from July 24, 2021 on Cherry Street at MLK Boulevard.

The incident in July resulted in the deaths of 20 year-old Donovan Cason and 21 year-old Kabryan Johnson. The suspect in question had also shot a 20 year-old female and a 20 year-old male who were taken to the hospital and listed in stable condition.

A news release from the Bibb County Sheriff’s Office on Tuesday August 17, 2021, says Bibb County Investigators along with ATF agents and U.S. Marshals Northern District of Georgia Agents arrested 22 year-old Jacorey Meadows of Macon at an apartment complex in Atlanta without incident.

Anyone with information concerning this case is urged to contact the Bibb County Sheriff’s Office at 478-751-7500 or Macon Regional Crime Stoppers at 1-877-68CRIME. 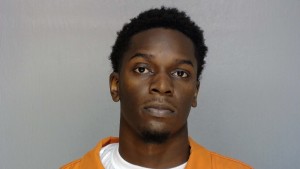