Another weather pattern shift is on the horizon

MACON, Georgia. (41NBC/WMGT)- Rain and humidity are back in the forecast for this week. 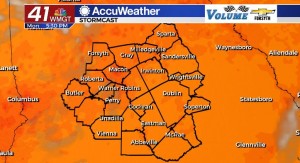 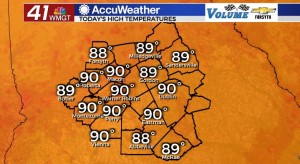 Did you enjoy the weather this weekend? We have more of that in store to kick off the new week, however a few changes are expected. Sunny skies kicked off our Monday morning, but more cloud cover is expected this afternoon. High pressure from this weekend will begin to move eastward, allowing for more cloud cover and an increase in rain chances. The chance for an isolated shower this afternoon is about 10%. High temperatures will top off in upper 80s and lower 90s around the region. It would be a good idea to bring sunglasses and sunblock with you out the door today, especially if your plans are outdoors. Overnight tonight lows will drop into the mid to upper 60s while more cloud cover fills in during the early morning hours of Tuesday. 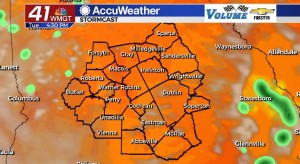 Clouds that begin to fill in during the overnight hours will be present during the sunrise. A few locations could wake up to patch fog, but a good amount of sunshine should still be in the region early. During the afternoon cloud cover will become increasingly scattered. High temperatures will be a bit warmer with highs topping off in the lower 90s for most of Middle GA. A weak high pressure will still have influence on the area, but not enough to prevent all rain or clouds. Rain chances will be higher than today with about 20% of Middle Georgia seeing a shower. For tomorrow night, cloud cover will increase drastically heading into Wednesday. High pressure around the region will break down, and temperatures will fall into the upper 60s. 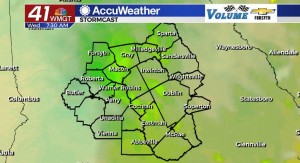 Enjoy today and tomorrow because Wednesday begins the actual pattern change. A cold front will begin to push in from the north, bringing cooler and more humid conditions along with rainfall. Isolated storms are expected Wednesday afternoon and evening ahead of the cold front as cloud cover dominates the afternoon. High temperatures will fall a bit back into the upper 80s with a couple of 90s. The clouds will remain overnight as lows fall into the lower 70s and upper 60s heading into Thursday.

Thursday is looking like the wet day of the week as the cold front officially pushes through the Middle Georgia region. Some locations may record more than half an inch of rainfall with the storms in the afternoon and evening. High temperatures will top off in the upper 80s under mostly cloudy skies. Low temperatures will be in the lower 70s as clouds remain overhead. At this time scattered showers and storms look to remain in the area beyond the passing of the cold front. This pattern could carry into the weekend. 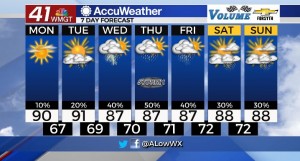