SANDERSVILLE, Georgia (41NBC/WMGT) — The Supreme Court of Georgia has ruled against a Washington County judge’s decision that granted three former county sheriff’s deputies immunity from prosecution before they were set to stand trial in the 2017 tasing death of an African-American man.

Evidence shows that on July 7th, 2017, Henry Copeland, Rhett Scott, and Michael Howell were involved in tasing Eurie Martin to death for more than 4 minutes and left him on the ground face down. According to the Supreme Court of Georgia, Martin suffered from mental illness and was unarmed during the tasing. 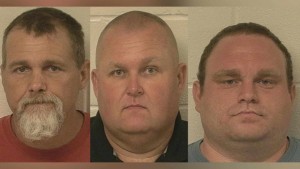 Former Washington County deputies who were arrested and charged with Eurie Martin’s death.

In August 2018, a Washington County grand jury indicted Copeland, Scott, and Howell for several charges, including felony murder, for the death of Martin.

The Supreme Court of Georgia ruled in the District Attorney’s favor.

“We determine that, in granting immunity, the trial court made findings of material fact
that were inconsistent with its legal conclusions regarding the deputies’ encounter with Martin, conflated principles regarding the reasonable use of force by law enforcement with self-defense and immunity, made unclear findings of material fact with respect to whether any or all of the deputies used force intended or likely to cause death, and did not address the facts pertinent to each of the three deputies individually,” said Justice Charles J. Bethel. “For these reasons, we vacate the trial court’s ruling and remand the cases for further consideration consistent with this opinion.”

The case will be sent back to the trial court for fresh consideration of the deputies’ immunity motions.