It happened around 5 p.m., according to a Perry Police news release, which said a silver car entered the store parking lot and parked near the Garden Center.

“Two males exited the SUV and entered the general merchandise door,” the release said. “The driver went straight to the rear restroom while the passenger went to the front restroom. The passenger then entered through the swinging doors to the rear employee back hall area where he walked the rear hallway to the employee lounge. He exited the employee lounge and walked up to the electronic key box that holds all the store keys. He looked as though he was trying to use a white card to access the box but was not successful. He then walked past the electronics security room, which is where all the high-dollar electronics such as phones, video game consoles, laptops and accessories are kept until purchased. The male pushed on the door and gained access. He then exited the security room with a cardboard box that was closed and had some paperwork in his hand. He exited the rear employee door just after the driver exited the rear restroom, and they both then exited the general merchandise door.”

Photos of the suspects and the vehicle they drove are attached. 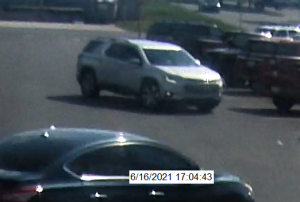 Contact Detective Que Gilliam at (478) 988-2834 or quridsha.gilliam@perry-ga.gov if you have any information.