Woman wanted for fraud and forgery in Macon and Milledgeville banks

MACON, Georgia (41NBC/WMGT) — A woman is wanted for forgery and fraud in Bibb County after wrongfully obtaining money from several banks in the middle Georgia area while assuming others’ identities and cashing fraudulent checks.

The Bibb County Sheriff’s Office is asking for the public’s help in finding a suspect after a victim reported that their identity was being used in the beginning of December. The incidents connected to the suspect took place between December 1st and December 2nd of 2021, in a local Macon-Bibb bank, and another bank in Milledgeville. It’s reported that the suspect assumed the identity of an account holder and forged their signature in order to withdraw cash, she also wrote several fraudulent cashier’s checks.

The BCSO describes the suspect as an older white woman with long dark hair that’s blond on top, wearing a burgundy shirt, light blue face mask, and a dark or black colored sweater. 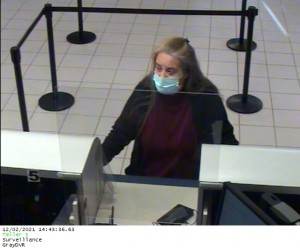 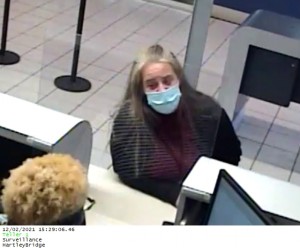