WARNER ROBINS, Georgia (41NBC/WMGT)—Warner Robins City Administrator David Corbin is clarifying what his office did in regards to the city IRS tax lien.

Corbin served as the city’s interim Chief Financial Officer since August 2021. Corbin says it was brought to his attention that the City of Warner Robins did not properly file with the IRS, or properly notify employees of insurance coverage available through the Affordable Care Act in 2016 and 2018.

Corbin says his office did re-submit those filings because it was unclear if the city had filed them properly.

According to Corbin, the city does provide that coverage and believes it made substantial steps toward compliance. But the IRS levied $423,000 for the 2016 claim from the city’s bank account.

41NBC also spoke with mayoral candidate LaRhonda Patrick about her feelings on the letter from Corbin.

The letter also says Corbin’s office is using external counsel and accountants with IRS experience to work on the IRS claims.

41NBC did reach out to David Corbin’s office for an interview, but he is not committing outside of his written statement.

You can read the full letter below: 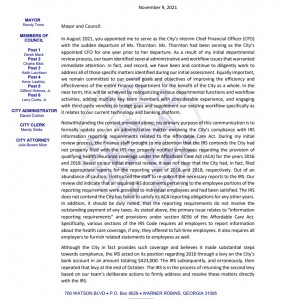 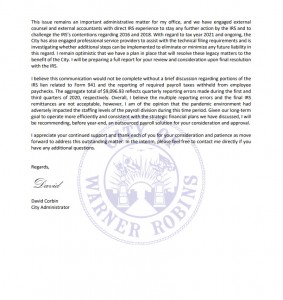