The suspect in a shooting that left a woman dead last week now faces an additional charge after medical examiners discovered the victim was pregnant.

UPDATE (6/16) –  The suspect in a shooting that left a woman dead last week now faces an additional charge after medical examiners discovered the victim was pregnant.

30-year-old Patricia Gamboa of Miami died after being shot on June 10.

Waller is being held without bond and additional charges are pending.

The release said Waller was identified as the possible suspect after deputies arrived to the scene of the shooting on Appling Court. He was taken into custody after being interviewed.

According to the Sheriff’s Office, the shooting happened around 9:30 Thursday morning in the 1200 block of Appling Court.

Deputies say the driver was inside the van when she was shot by a man as several people were trying to leave a home on Appling Court.

According to deputies, the passengers tried to drive the female to Atrium Health Navicent in Macon. However deputies located the van along Gray Highway near the Interstate 16 bridge after one of the passengers called 911.

When deputies arrived along Gray Highway they found the woman with a fatal gunshot wound.

The Georgia Department of Transportation reports all lanes, in both directions, are blocked near I-16 at the US 23 S/US 129 N interchange (exit 1A) due to the law enforcement activity. Ramps from I-75 eastbound to I-16 are also blocked in the area. Drivers should seek alternate routes.

Additional deputies also responded to the original shooting location and reported finding the suspected shooter and a handgun. Deputies transported him to the Bibb County Sheriff’s Office Investigations Division for an interview. The passengers inside the van are also being interviewed at this time.

Anyone with information in reference to this investigation is urged to contact the Bibb County Sheriff’s Office at 478-751-7500 or Macon Regional Crime Stoppers at 1-877-68CRIME. 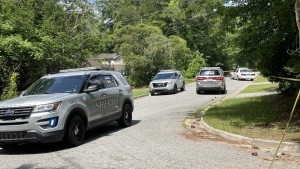