SOPERTON, Georgia (41NBC/WMGT) — The Treutlen County Board of Education and Johnson County School System both sent out announcements concerning a football game cancellation due to active threats against students and fans.

The letter also says there have been reports of other threats related to this incident, some resulting in a school lockdown Thursday. The letter states the suspect behind these threats has not been apprehended and the threats are still active.

Treutlen County said that their school system reached out to Johnson County schools to try to reschedule the game to daylight hours another time for better safety, but according to the release- the requests were not honored by the school system. 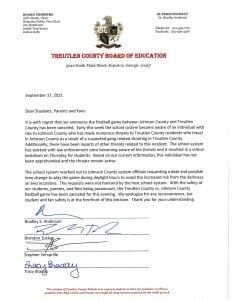