The heatwave continues for Middle Georgia

MACON, Georgia (41NBC/WMGT) – Another day with highs in the 90s awaits Middle Georgia this afternoon. 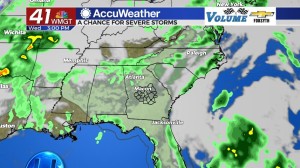 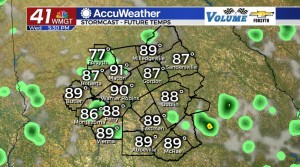 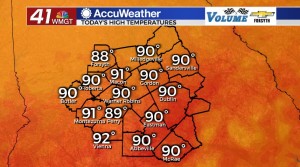 There will be plenty of sunshine around Middle Georgia again this afternoon as the heat of summer draws on once again. High temperatures in all but two or three spots will be in the lower 90s this afternoon. Cloud fields will develop as the heat of the day builds up, and more isolated pop-up showers and storms will fire up during the late afternoon and evening hours. No severe storms are expected. Winds for today will predominantly come in from the west-southwest at 5-10 mph. 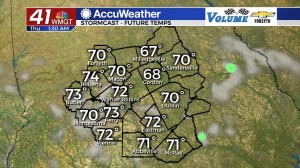 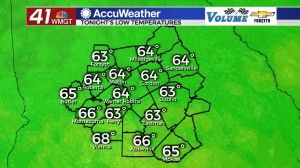 A couple of showers and storms may persist into the early part of tonight, however nothing should last past midnight. Scattered clouds will also persist early, however unlike previous nights we should not see many of those clouds hang around until tomorrow morning. Low temperatures overnight will again be in the low to mid 60s across the region. Winds will be variable at around 5 mph. 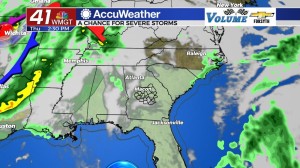 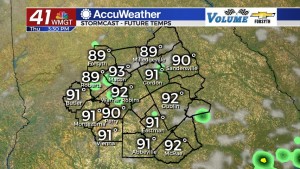 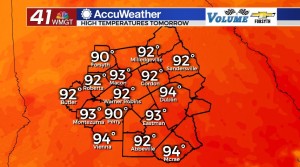 Thursday will be the hottest afternoon of the week as all Middle Georgia locations eclipse the 90 degree mark and many spots push towards the mid 90s. Heat indices could be pushing towards the upper 90s in the hottest spots. Again the wind will come in from the southwest at 5-10 mph, and again showers and storms will fire up in the late afternoon and evening hours, bringing on a bit of relief from the heat for those that see them. Severe weather is also not expected with any of these storms. 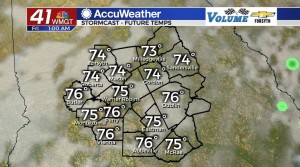 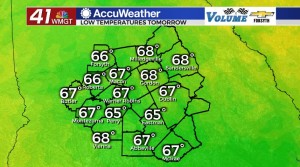 Cloud cover will thicken overnight tonight thanks to a warm front that will push through the area. Low temperatures will be kept warmer as a result, mainly staying in the upper 60s. A few spots may not drop below 70 degrees. Winds will be variable at around 5 mph. 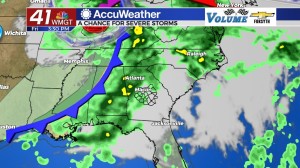 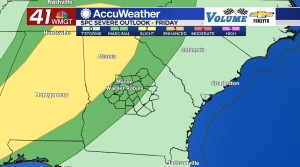 Friday will be a bit cooler in the afternoon as a result of a cold front coming in late. Until the front arrives the wind will come in from the west-southwest at about 12-17 mph. Gusts could reach speeds of up to 30 mph. Highs will reach the mid to upper 80s, and one or two spots may still reach 90 degrees. A few isolated showers may fire up in the early afternoon hours, however the main line of storms and related storm activity will not arrive until late. Some scattered storms may arrive first, bringing a risk for some gusty winds and small hail. A possible spin-up tornado cannot be ruled out during this timeframe either. As of now, most of the region is under a Level 1 “Marginal” risk for severe weather Friday afternoon. The southern counties are not currently under any risk zone. 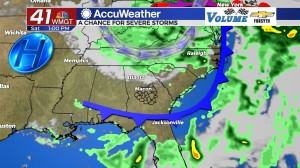 Saturday will be cooler as mostly sunny skies return with winds coming in from the west and west-northwest at 10-15 mph. Highs will be in the low to mid 80s. No isolated storms are expected in the afternoon.

Mother’s Day will also be pleasant with highs in the lower 80s and winds coming in from the north-northeast, adding a bit of a cool breeze to the air. Again, no isolated storms should fire up in the afternoon. Conditions should remain relatively seasonal heading into the second week of May. 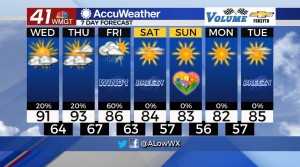