MACON, Georgia (41NBC/WMGT) — The Bibb County Sheriff’s Office is asking for help that will lead to identifying the suspects responsible for illegally dumping tires on Wednesday July 28, 2021.

According to the Sheriff’s release, the occupants of the truck pictured here were seen illegally dumping about 20 tires on a lot at the corner of West Green Street and Huff Lane around 9:20 p.m. The release describes the truck as a mid to late 90s Chevrolet S10 or similar model GMC Sonoma that appears to be lifted with after market rims and black fender extensions.

The Sheriff’s Office is urging anyone that has information that could help identify or locate the suspects or the truck to call Captain George Meadows at (478) 747-3278 or Crimestoppers at (478) 742- 2330. 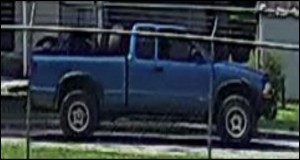