Sunshine sticks around today; storms expected to kick off Wednesday 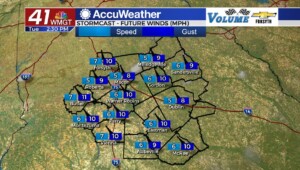 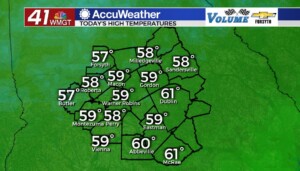 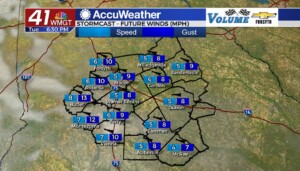 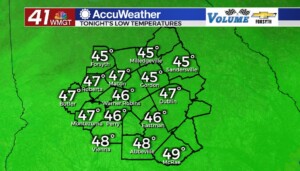 Tuesday brings overall pleasant conditions to Middle Georgia as temperatures climb to peaks in the upper 50s and lower 60s. Winds will be rather calm for much of the afternoon, however heading towards the evening they will blow from the southeast at 5-10 mph. These winds will be working to return as much moisture to the atmosphere as possible ahead of the storms arriving early tomorrow. Clouds will likely begin to move into the region from the south/southwest during the evening hours today. Early cloud cover will predominantly be cirrus clouds before thicker clouds return overnight. Low temperatures around Middle Georgia will be met ahead of midnight tonight, bottoming out in the upper 40s. A warm front will then push those temperatures back up again heading into the early parts of Wednesday morning. 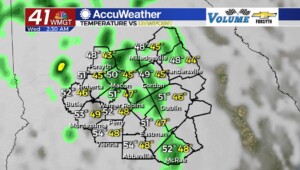 Shower activity is likely to move into Middle Georgia from the southwest not long after the calendar flips from Jan 24th to Jan 25th. Winds will increase in speed as they shift more to the south-southeast. Gusts at this point could push close to 30 mph. Temperatures will likely be in the lower 50s with dew points in the upper 40s and lower 50s. Severe weather is highly unlikely at this point due to the lack of heat. Temperatures, however, will continue to rise as we push towards sunrise. Shower activity is likely to taper off just ahead of the sunrise as well. 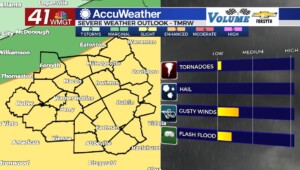 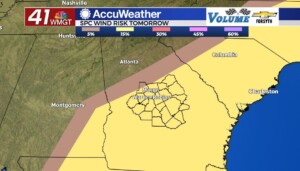 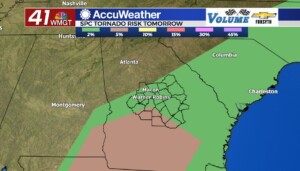 Another cold front is coming to Middle Georgia early Wednesday, and once again the region finds itself at risk for severe weather. The SPC has issued a Level 2 “Slight” Risk for pretty much the entire region. The primary threats will be strong straight-line winds and flash flooding. An isolated tornado, however, cannot be ruled out. 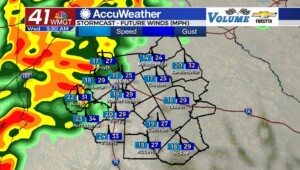 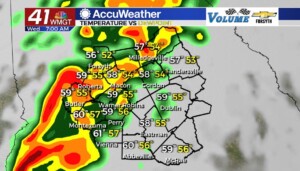 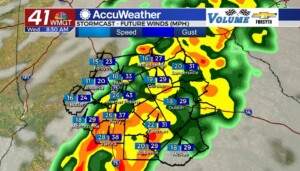 The line of storms is anticipated to arrive in the northwestern counties of Middle Georgia sometime between 6 and 8 am tomorrow. For those counties, that difference in timing really doesn’t have major impact. Temperatures will likely be in the upper 50s or lower 60s regardless of whether the line arrives at 6 or 8 am. Winds during that timeframe will blow from the south-southwest with sustained speeds potentially reaching upwards of 24 mph. Gusts could push over 40 mph. 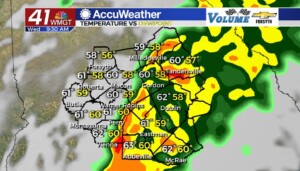 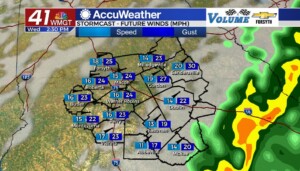 The forecast gets a little more difficult for the southeastern counties. The earlier the line of storms arrives, the lower the severe weather threat will be. If the models that lean more towards the 8am arrival for the northwestern counties are correct, than it will likely mean an arrival a few hours later for those southern/southeastern counties. Temperatures would peak in the mid to upper 60s vs the low to mid 60s as a result of a slower moving line. That could enhance the severe threat in some of those areas. 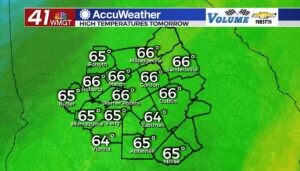 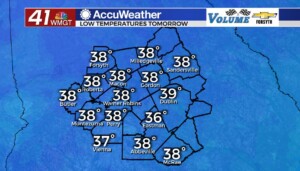 The rain should clear out of the southeastern counties by the suppertime hours tomorrow. High temperatures around the region will largely be in the mid 60s, however for most of Middle Georgia that will likely be after the storms have passed. Winds once the line moves through will blow from the west-northwest at 8-15 mph. Overnight low temperatures will be in the upper 30s and lower 40s. 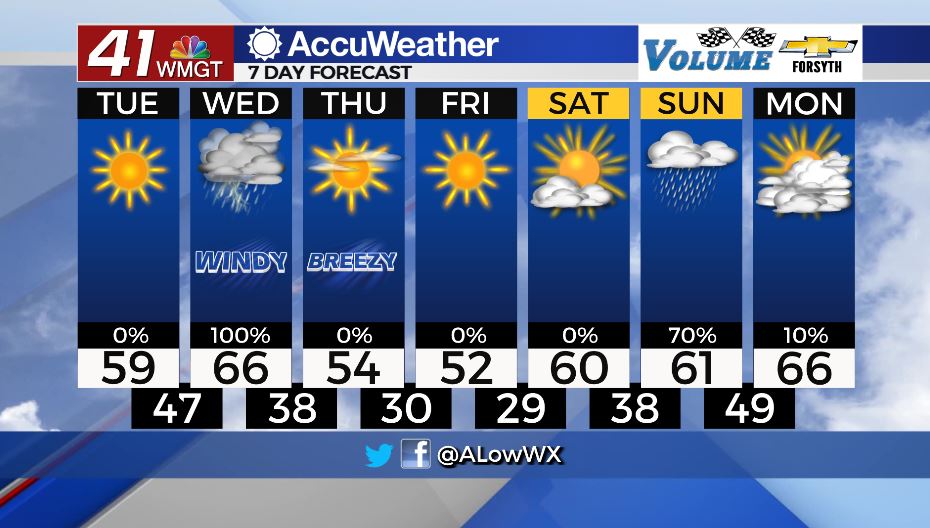