MACON, Georgia (41NBC/WMGT) – Middle Georgia is set for a day of sunshine following a cloudy and wet weekend. 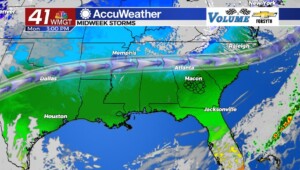 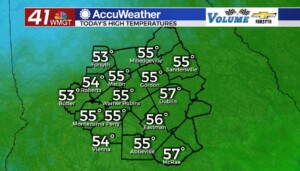 Middle Georgia was able to watch the sunrise to kick off the new week. The afternoon will be sunny and cool as winds blow in from the northwest at 5-15 mph. Gusts could reach speeds of up to 25 mph. High temperatures will largely reach the mid 50s around the region, however wind chills will likely stay closer to the lower 50s. Cloud cover will be difficult to come by most of the day, however a few outflow cirrus clouds are likely in some of the northern counties. 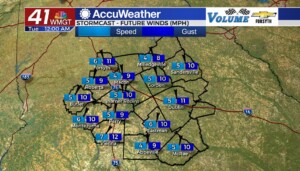 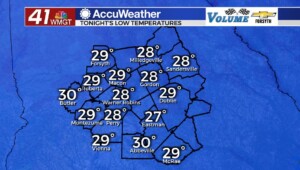 Tonight skies will remain clear and the wind will shift more to the north, slowing to about 5 mph across the board. Temperatures will drop below freezing across the region with many spots likely dropping below 30 degrees. Despite the calm winds into the morning hours of Tuesday, fog is unlikely due to the drier conditions brought on by Sunday’s cold front. 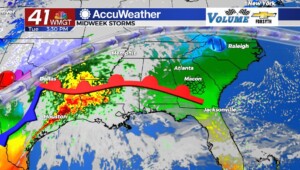 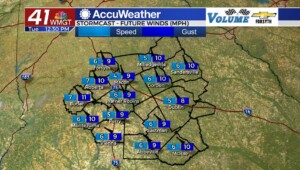 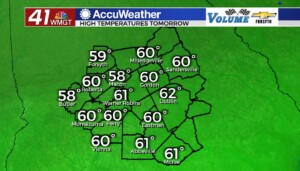 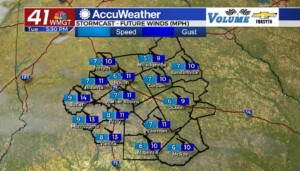 The process of setting up our next storm system is being sped-run and will take place in the 24 hour window from 8am Tuesday to 8 am Wednesday. In fact, it may be more compressed than that. The return flow process can only begin once the winds shift towards the south. That should happen around lunchtime tomorrow: southeasterly winds at 5-10 mph will take over for the remainder of the day, transporting warm and moist air back into the region. Sunny skies will stick around for most of the afternoon as temperatures climb into the upper 50s and lower 60s around Middle Georgia. Some cirrus clouds may begin to move in during the early evening hours. 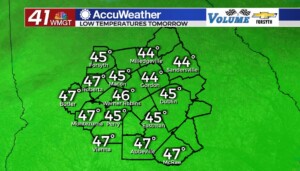 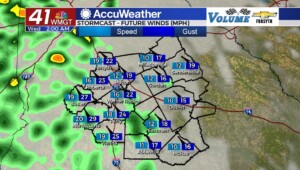 Cloud cover will thicken overnight tomorrow night as the winds shift more due south, increasing their speed to upwards of 20 mph ahead of the sunrise on Wednesday. After midnight some showers are likely to move into the region, with heavier rain looming not to much further behind. Low temperatures will be met before midnight as they only drop into the mid to upper 40s. They will then increase until thunderstorms arrive around sunrise on Wednesday morning. 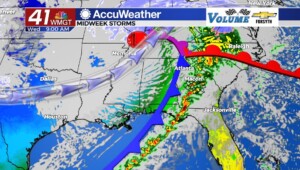 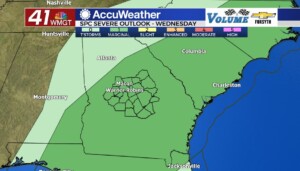 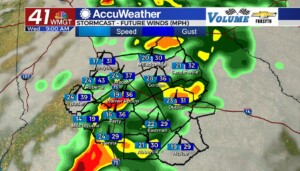 Wednesday will begin with thunderstorms as a cold front moves through Middle Georgia from sunrise until the early lunch hours. A Level 1 “Marginal” Risk has been issued for the entire region ahead of this cold front. Temperatures will likely be in the upper 50s in the northwestern counties by the time the line arrives, however by the time it reaches the southeastern counties some spots could be pushing into the mid 60s. The good news about this system is the aforementioned limited return flow: With less time between storms there is less heat to fuel storms, and dew points will also remain lower as there is not enough time for moisture replenishment.

Following the storms on Wednesday more pleasant conditions should stick with Middle Georgia for the remainder of the work week. 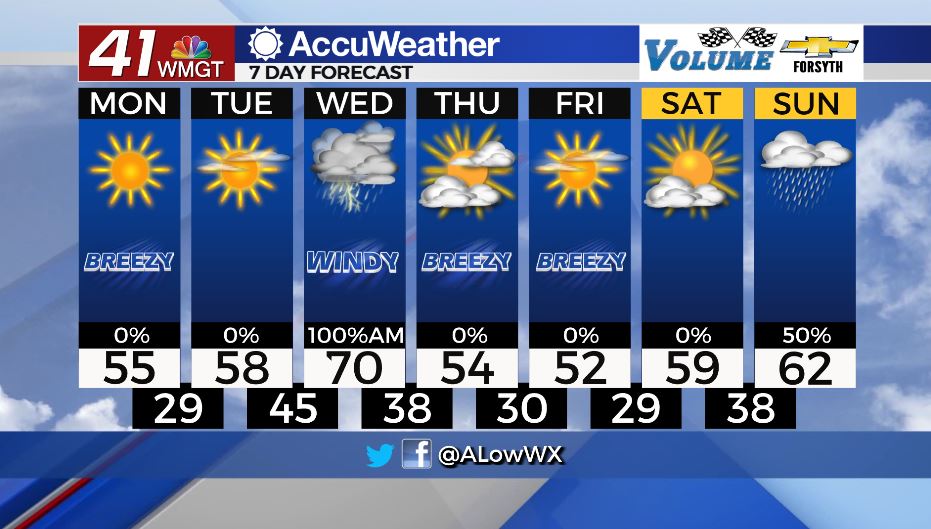