MACON, Georgia (41NBC/WMGT) – Heavy rainfall is expected across the southeast this week as a frontal system stalls out across the area.

A cold front has been moving from the mid-west into the southeast, but it is slowing down in speed. The swath of rainfall associated with the frontal system stretched from Michigan to east Texas Wednesday morning. 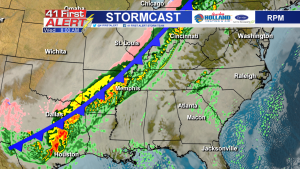 Wednesday through Friday, the cold front will likely become stationary. A blocking pattern of two high pressure systems will keep the front from moving much through the end of the work week.

The Bermuda High over the Atlantic Ocean will cause winds to flow from the south/southeast over the southern states. This wind flow is going to feed the atmosphere with warm, moist air.

Where both these wind flows meet, air is rising and condensing. Temperatures are dropping behind the front and where the cold air overlaps moisture, wintry precipitation is falling. Meanwhile, ahead of the front where it is warmer, rain is falling. 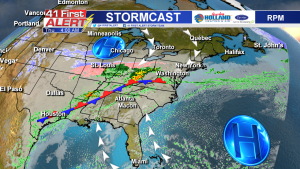 The heaviest rainfall totals are expected in a general line from east Texas to southern Indiana. Wednesday morning, forecast models showed anywhere from 2-7 inches in this area through Monday morning.

Middle Georgia will only experience isolated showers through Saturday, so rainfall totals will not be significant during the next few days.

The stalled frontal system will likely be moving again or shift more so towards Georgia later this weekend. Our rain chances will increase Sunday and Monday. As the cold front starts to clear out of Middle Georgia early next week, temperatures will become more seasonal, dipping into the 60’s. 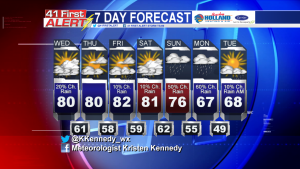