MACON, Georgia (41NBC/WMGT) — The Bibb County Sheriff’s Office is asking for the public’s help in finding the suspect wanted in connection to a commercial burglary that happened in the early hours of Monday, November 29, 2021.

According to the BCSO, the suspect broke into the front of the R&T Mart at 4437 Columbus Road around 1:13 a.m. and took cash from an office, then fled the scene on foot.

The suspect is described as a male wearing a light gray hoodie, face mask, and blue jeans.

Anyone with information about this incident or who the suspect might be is urged to call the Bibb County Sheriff’s Office at (478) 751-7500, or the Macon Regional Crime Stoppers at 1-877-68CRIME. 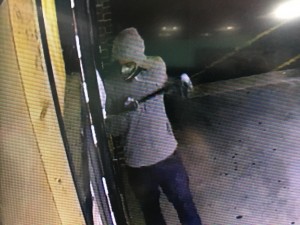