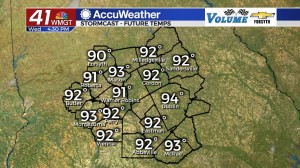 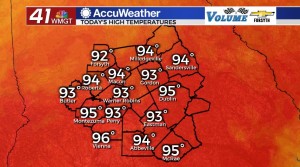 The month of May has been well above average for Middle Georgia. It’s why the severe weather season has seemingly come to an early end with summertime arriving early. The first week of May saw highs in the 90s, the second week the mid and upper 80s, and now we are back in the 90s once again. Today’s highs, however, are not just the low 90s. We are soaring into the mid 90s for the first time in 2022 this afternoon with some spots pushing into the upper 90s. Cloud cover will be pretty scarce later, however more cloud fields are likely to form than yesterday thanks to a shift in the wind to the south. No rain is anticipated for today, so other ways to beat the heat will be needed. 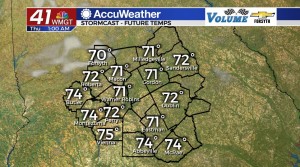 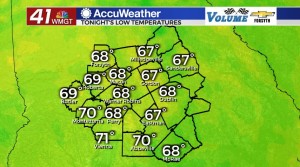 More clouds will arrive during the overnight hours, however they will just be passing through. They will be high level clouds, but combined with south-southwesterly winds at 5-10 mph it will warm up the overnight conditions by 10 degrees or more when compared to last night. Skies should be mostly clear by tomorrow morning when lows drop into the upper 60s and lower 70s. 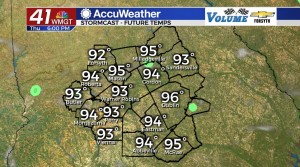 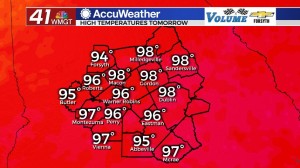 The hottest day of the week; highs will reach the upper 90s with some spots potentially reaching 100. Winds will still come in from the southwest, however the speed should pick up a bit to about 8-13 mph. Gusts could reach speeds of up to 20 mph. The wind will do little to help beat the heat as it continues to feed warm and humid air into Georgia. There will be cloud fields that develop in the afternoon, and a few isolated showers or storms will also be possible late in the afternoon. Storm activity should drop outdoor temperatures by upwards of 20 degrees for those who are lucky enough to see them. 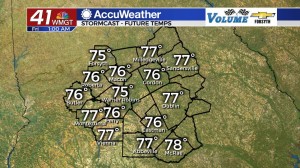 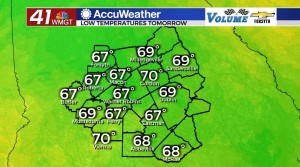 Most of the clouds that develop in the afternoon will clear quickly once the sun sets. There will still be a slight chance for showers early. The wind will still come from the southwest, this time at 6-12 mph. Lows will again only reach the upper 60s and lower 70s.

Friday will not be as hot as tomorrow, however it will easily be every bit as hot as today. It will also be more humid due to the continued southwesterly wind flow. Highs will reach the mid to upper 90s as clouds again fill in during the afternoon hours. South-southwest winds will come in at 10-15 mph. Some isolated showers and storms will again be possible in the afternoon. Overnight skies will be mostly clear as lows stay in the upper 60s and lower 70s.

Saturday will see highs return to the upper 80s for some locations however many will still eclipse 90 degrees. The day will begin sunny with plenty of clouds building in during the afternoon. The wind will still blow from the south-southwest, again at 10-15 mph. The amount of PM storms will likely be more numerous than what is seen during the work week. Overnight lows will drop into the mid to upper 60s.

Sunday will see mostly cloudy skies with highs in the low to mid 80s. Scattered storms during the afternoon are likely. Winds will be variable at around 5 mph. Overnight lows will drop into the mid to upper 60s. 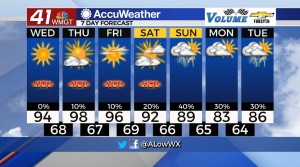