MACON, Georgia. (41NBC/WMGT)-Heavy rain will remain possible for Middle Georgia through the end of the week. 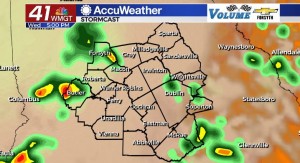 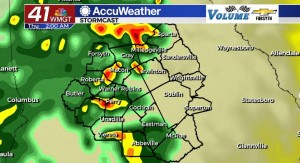 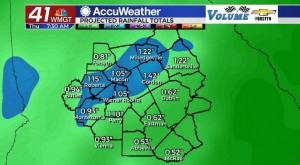 Grab your rain gear out the door! A wet Wednesday is set to begin a several day marathon of rain chances as a pair of systems end the pleasant weather trend. To the north is an approaching cold front, bringing cooler temperatures and scattered storms to the Peach State. To the west is what is left of Tropical Storm Nicholas. Nicholas is the main culprit for the amount of rain expected the next several days. All the moisture brought north from the tropics will be stalled out by the cold front coming from the north, setting the stage for heavy downpours the next few days.

For today, cloud cover will be abundant most of the day with high temperatures in the upper 70s and lower 80s. Some showers of light rain moved in this morning, but heavier rain will begin around lunchtime. Once the first storms begin, several waves will move through during the afternoon hours. These waves will likely contain thunderstorms, however severe weather is not expected at this time. Tonight the thunder and lightning will stop for most of the region, but heavy rain will continue into Thursday morning. 24 hour rain totals heading into tomorrow morning around the region will be close to if not over an inch for most locations. Low temperatures tonight will be in the upper 60s and lower 70s. 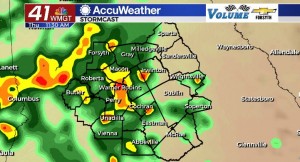 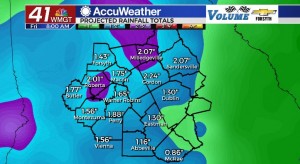 Unlike today where the rain early on was only some light sprinkles, tomorrow large parts of Middle Georgia will wake up to moderate to heavy rainfall. Your umbrella/raincoat will once again be needed out the door. Very similar to today there will be several rounds of thunderstorms in the afternoon hours. Flash flooding will be a concern as another 1/2 inch+ of rain is expected for most locations around Middle GA for the next 24 hours. If you see flash flooding, get to high ground. If driving, turn around. Cloudy skies will remain over the region with the stormy weather as high temperatures top off in the mid to upper 70s. Through the overnight hours moderate to heavy rainfall will continue, however thunderstorm activity will lessen. Low temperatures will be in the upper 60s and lower 70s. 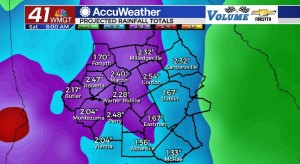 Rain from Thursday night should slow early on Friday before more rounds of thunderstorms begin around lunchtime. Thunderstorms throughout Friday afternoon will once again bring localized heavy rainfall, bringing at least another half an inch to much of the region. The cloud cover and rain will once again keep high temperatures down, however a few places should eclipse the 80 degree mark. By Saturday morning some cities in Middle Georgia will have received more than 2 inches of rain since Wednesday.

At this time there remains some uncertainty as to what will happen over the weekend. Partly to mostly cloudy skies are likely both Saturday and Sunday with scattered thunderstorm activity during the afternoon hours. Rainfall totals should be lower than Wednesday through Friday, and temperatures will be back into the lower and mid 80s around the region. The potential for scattered storm activity to carry into next week remains high at this time.