MACON, Georgia (41NBC/WMGT) – A cold front will bring some thunderstorms to parts of Middle Georgia tonight. 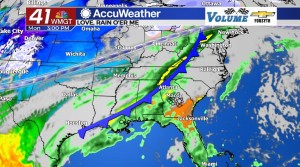 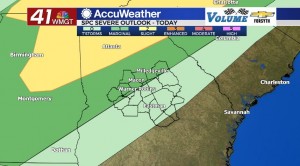 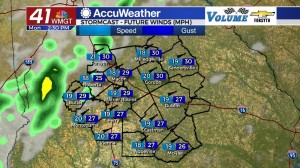 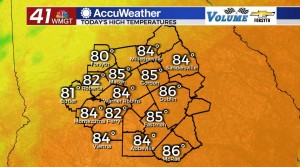 After more than a week without seeing rain in the forecast, it is back as we begin the first full week of March. Humidity began to ramp up over the weekend as the wind shifted to the south overnight Friday into Saturday. Cloud cover also returned in the afternoon over the weekend as a result of the humidity increase. Today, the sun is with us to begin the day, however clouds will build during the afternoon hours. Highs will be in the low to mid 80s today with winds out of the southwest blowing in at 15-20 mph. Gusts will likely hang in the 25-30 mph range most of the afternoon. A couple of showers could fire up in the northern counties during the late afternoon and early evening hours. 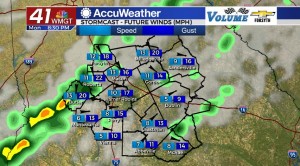 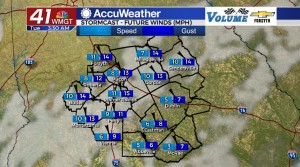 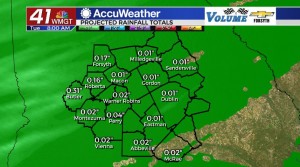 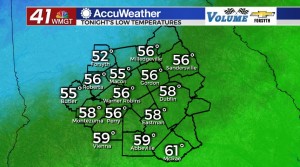 Overnight is when the cold front will arrive. In fact it won’t be too long after sunset. There is a Level 1 Marginal risk for severe weather in Hancock, Baldwin, Jones, Monroe, Bibb, Crawford, and Taylor Counties for tonight, however more than likely we won’t see any issues. The cold front will be weakening as it moves in, and only counties such as Monroe, Crawford, and Bibb really have a good chance to see thunderstorms. The rest will either see showers or just clouds and wind as we go through tonight and into tomorrow morning. Rain totals will be low; most spots will only receive trace amounts however upwards of .25 inches could be recorded in counties such as Monroe or Crawford. Overnight lows will drop into the 50s, staying rather warm, even after the winds shift to the north-northwest at 5-10 mph. 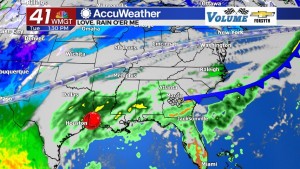 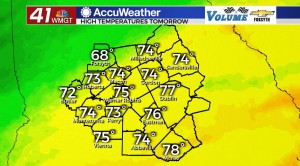 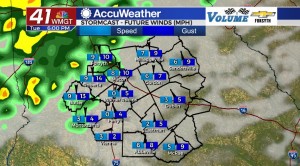 Cloud cover will hang around from Monday night for much of the day on Tuesday, however some breaks in the clouds are likely. Tuesday will see limited opportunities for rain as a stationary front begins to set up just to the west. Much like Monday, it is the northern counties with the best chance for rain and/or thunder come the evening hours of Tuesday. Highs will be a bit cooler in response to the cold front’s passing, topping off in the 70s. Winds will begin to be variable, hanging around the 5 mph mark. 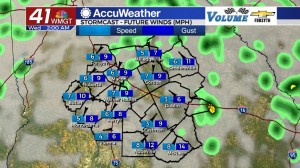 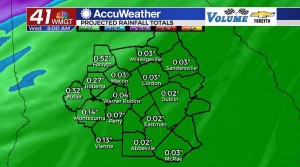 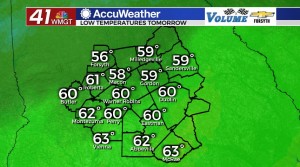 Overnight rain chances ramp up again, though this remains in the northern counties yet again in the form of moderate rainfall with a few rumbles of thunder possible. Severe weather is not expected. Low temperatures will return to the upper 50s and lower 60s. 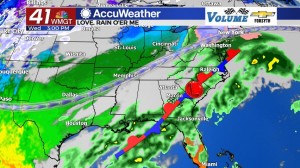 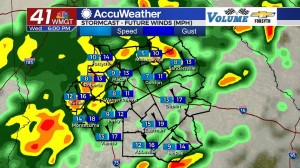 The stationary front will begin to move into the region come Wednesday afternoon. This will initially bring on scattered showers for most of the region before it becomes more of a widespread rain event with moderate to heavy rainfall taking over Wednesday afternoon and evening. Highs will be in the upper 60s and lower 70s as the humid conditions stick around. 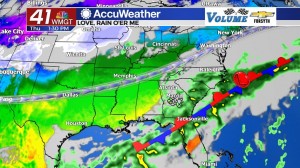 More heavy rain is likely Thursday as the front remains in the area. The rain should lighten up a bit, but by this point several areas in Middle Georgia might be pushing to close to an inch or more of rainfall so far this week. That number will only grow between Thursday and Friday, especially with the next cold front in line to pass through Friday night. As of now, severe weather isn’t expected Friday but that can easily change before it gets here. 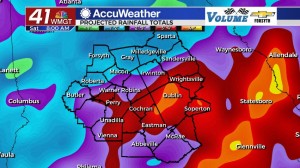 Sunshine should return over the weekend. This weekend is also when clocks will be set forward to begin Daylight Savings Time. 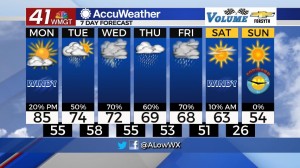