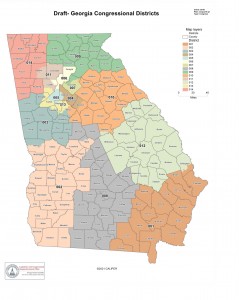 We spoke with two political science professors to get their impressions of the map.

Chris Grant, a political science professor at Mercer University, says the proposed map could give Republicans an opportunity to pick up another U.S. House Seat. It looks like there is only one change for a member of Congress’ seat. It’s the 6th district where Congresswoman Lucy McBath is the incumbent.

“There are no new seats in the Georgia delegation,” he said .”The trends in the state are probably favoring the Democratic party over the Republican party. Republicans are looking for a single opportunity as opposed to multiple opportunities.”

Brooke Miller, a political science professor at Middle Georgia State University, says the proposal looks very similar to the previous map. The biggest changes are where counties could be split.

She thinks it won’t change who is elected at the federal level but does think it could influence state elected officials.

“When we’re talking about state level, when we talk about state senate and state representatives, that’s where things are going to get a little bit tricky,” she said. “But it looks like from the federal level, it looks like what they’re trying to do is keep the same people that were there, there.”

We reached out to Senator John F. Kennedy for an interview multiple times, but he did not answer our requests. He is, however, quoted in the press release that included the map:

“Even given the delay of official Census numbers, the Senate Redistricting Committee has diligently worked to ensure that we hear from citizens across all regions of the state. Looking at this map, it is obvious that Georgians have been heard, and will continue to be heard.”

The special session for the redistricting process begins November 3.