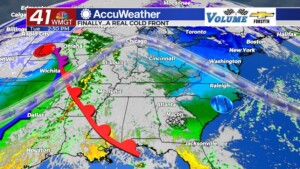 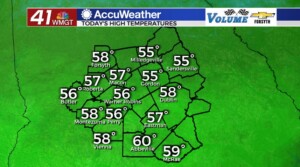 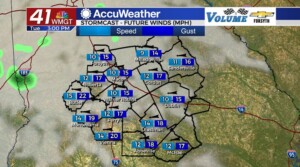 It was once again a cloudy morning across Middle Georgia. It was a little cooler than yesterday morning for most spots, and unlike yesterday it wasn’t really foggy nor was it wet. Shower activity should remain at a minimum today despite the overall cloudy conditions. Our southeastern counties will likely see a decent amount of sun today, while the rest of the region will be lucky to see a couple of pockets. High temperatures will mainly reach the mid to upper 50s; only slightly warmer than the temperatures we woke up to. The southeastern counties will see the warmest highs. The northwestern counties will have the highest odds for showers today, however they can occur anywhere in the region. Any showers we see will be light and short lived. Winds today will blow from the east-northeast at 10-15 mph with gusts ranging from 20-25 mph. 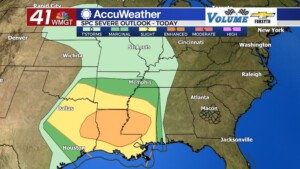 While this is unrelated to Middle Georgia, anyone in the region with friends or family in Eastern Texas, anywhere in Louisiana, or the southern half of Mississippi should let them know to be weather aware today. There have already been a few tornadoes in Oklahoma and Texas so far this morning. It’s still a Level 3 severe weather risk over there for now, but given how active this morning has been the SPC could still upgrade it to a Level 4. 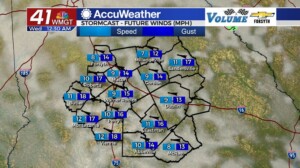 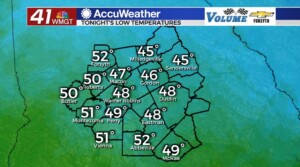 Tonight we will continue to see mostly cloudy conditions around Middle Georgia. It will still be slightly breezy with winds from the east at 5-10 mph with gusts between 15-20 mph. A couple of isolated showers will also be possible. Low temperatures will be in the mid to upper 40s for most of the region. 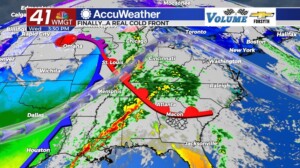 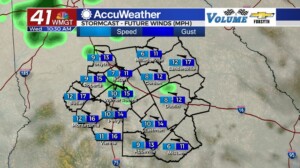 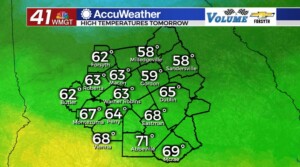 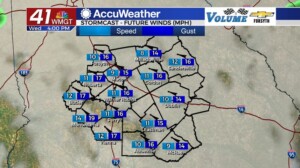 Wednesday will again be cloudy for Middle Georgia. It will be slightly warmer as a warm front begins to move through the state from the south. Highs will reach the 60s around the region with ambient winds blowing from the southeast at 5-15 mph. Rain is likely to move in during the afternoon in the form of scattered showers with some rumbles of thunder. 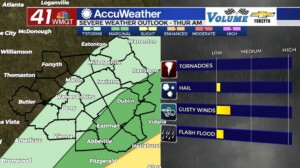 While no severe weather is expected during the day tomorrow, that is unfortunately not the case rolling into tomorrow night. A cold front arrive with a line of storms not long after midnight. It is with this line that we see a Level 1 “Marginal” threat for severe weather for parts of the region. At this time it includes Johnson, Treutlen, Wheeler, Telfair, Wilcox, Dodge, and Laurens Counties. A Level 2 “Slight” threat exists just to the southeast of Middle Georgia. The primary threats with the line of storms will be strong wind gusts and localized flash flooding. Small hail is unlikely, however, and the odds for any tornadic activity are extremely slim. 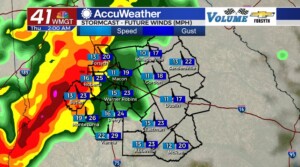 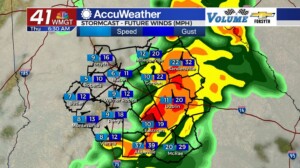 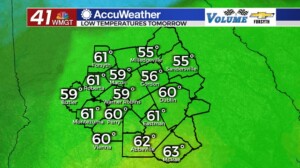 Ambient winds ahead of the line of storms will blow from the south-southeast at 10-17 mph with gusts reaching upwards of 30+ mph. Low temperatures will stay rather warm as a result of the warm front, only bottoming out in the upper 50s and low 60s for most of the region. Winds will begin to shift more towards the west and eventually the northwest once the line of storms moves through. 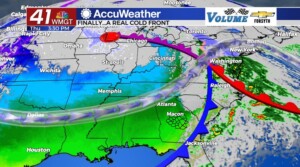 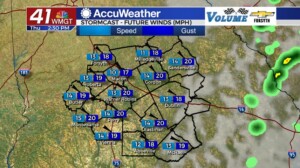 While Thursday will begin with storms thanks to the cold front moving through, they wont last long. By the time the sun rises there will not be much of it left, however there will still be plenty of cloud cover. That will clear up ahead of lunchtime with clear skies hanging the rest of the day. Even though the cold front is moving through early, it will take time for the cold and dry air to replace the warm and moist air around the region. Highs will reach their peaks for the week as the touch the mid to upper 60s. Winds will still be breezy from the northwest at 10-15 mph with gusts upwards of 15-20 mph.

Cold conditions will set in Thursday night as lows plummet into the mid 30s for most of the region. Things will remain clear into Friday as highs only reach the low to mid 50s. Over the weekend we could see some added cloud cover on Saturday, however the general trend will remain cold and dry as highs look to push towards the upper 40s by Sunday with lows dropping below the freezing point. 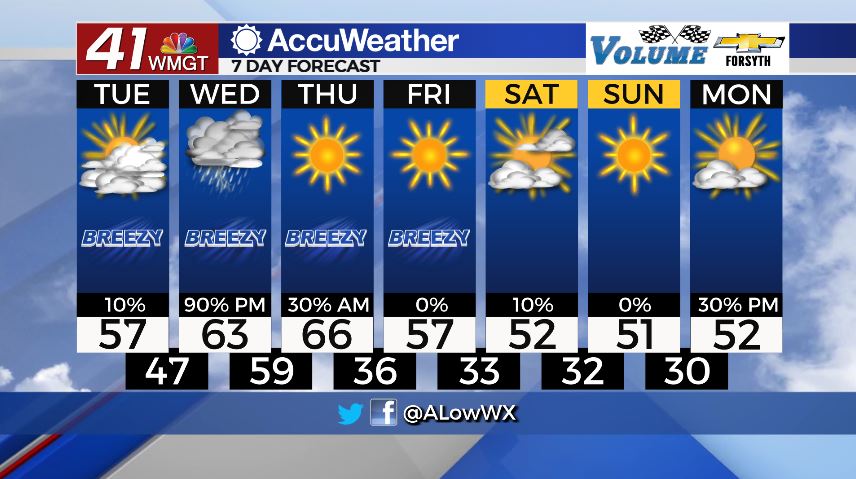