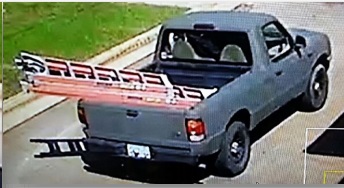 The suspect was captured on camera allegedly driving away from a construction site after stealing ladders.

Investigators say the truck has also been reported as suspicious in residential areas around Bibb County.

If you see this vehicle in your neighborhood or around a construction site report it immediately to the Bibb County Sheriff’s Office at 478-751-7500.