"The six items were the property of DNR Law Enforcement and were waiting to be equipped by Interceptor," the release said.

FORSYTH, Georgia (41NBC/WMGT) –  A Coffee County man was arrested Tuesday in connection to the theft of more than $60,000 worth of Georgia Department of Natural Resources Law Enforcement equipment.

James Russell Spell is charged with six felony counts of theft by taking.

“The six items were the property of DNR Law Enforcement and were waiting to be equipped by Interceptor,” the release said.

Investigators responded to Interceptor and determined from video footage that the first Polaris Ranger and trailer were stolen Saturday morning, pulled by a 4-door white truck. The second theft happened later that night and the third happened sometime that night or early Sunday morning.

A BOLO (be on the lookout) for the truck and equipment was issued to law enforcement throughout the state and was also posted on the Monroe County Sheriff’s Office Facebook page.

A Byron police officer then contacted the sheriff’s office to say that around midnight Saturday, he saw a truck and a trailer fitting the BOLO description getting gas at Buc-ees in Warner Robins. Monroe County investigators traveled there and obtained video footage of the transaction, which revealed the truck’s tag information. That info gave authorities Spell’s name and address.

A helicopter from the Georgia State Patrol Aviation Unit was requested to fly over Spell’s home. The white truck was seen as well as the stolen equipment. Investigators, along with DNR rangers, then made contact with Spell and placed him under arrest. 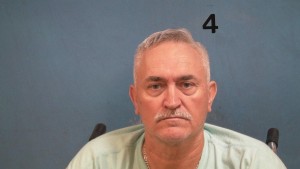