MACON, Georgia (41NBC/WMGT) – A Macon man is calling for the confederate monument in downtown Macon to remain in place.

“We live in this state and city, the way I look at it is, if you don’t like what the state and city and the South-East were grown on, then don’t live here,” resident Anthony Harris said Tuesday.

This comes after former Macon-Bibb Mayor C. Jack Ellis and others stood at the foot of the confederate monument on Cotton Avenue last week to express the need to remove the landmark.

Activists and local artists built an art installation around the statue to display African American history and expressions to call for the removal.

Harris says the statue is Macon’s history and should not come down. 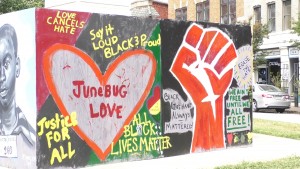 “If you’re going to complain about these statues then go somewhere where they don’t have them,” Harris said.

Some people were unhappy about what Harris was doing and say it’s a racist act.

Jermaine Salter is one of the few people who stopped by to express his feelings on why he disagrees with what Harris is doing.

“I saw he had a shirt that said justice for June Bug and was saying at the same time, don’t remove the statue,” Salter said. “I said if he knows June Bugg or cares anything about June Bugg, he either has to make a decision on what side of the bridge he is on,” Salter said.

Brandon Tolle brought his kids to the monument to educate them on the history and how it affects everyone today.

“We know the history of the monument and how it wasn’t originally here, but it was brought here for a purpose,” Tolle said. “I think it’s time to examine what those purposes are and we’re prayerful that our local leaders will come up with solutions, that we honor what people understand.”

Harris says the statue represents the foundation of the country and the improvements of America.

Mayor Robert Reichert extended his executive order Tuesday morning to allow the art installation to remain in place through July 4.